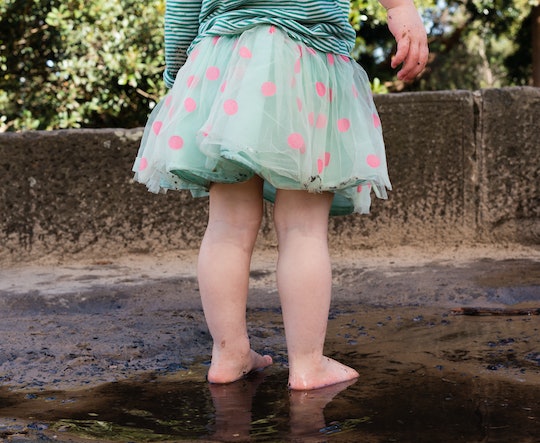 Actually, You're Hurting My Child When You Don't Respect Their Pronouns

I think it's safe to assume most of us are all too familiar with the recently politicized debate over transgender people's right to exist in public spaces, sparked by increased visibility of transgender celebrities and the so-called bathroom bills popping up around the country. Whether willfully or accidentally, people don't always think about the personal stories behind the publicity. So I am going to be blunt and tell, point blank, the ways people hurt my child when they don't respect their pronouns.

My child is transgender. For the past two and a half years, my child, who was assigned male at birth, has requested that we use she/her/hers pronouns. Then, about two weeks ago, they discovered that they/them/theirs was a valid singular pronoun option. Since they are both genders, this option elated them in its ability to accurately explain themselves.

My child is not stealth; the term used when someone who is trans would rather not let anyone know. In fact, I share their story with their permission. Some transgender people, however, are stealth because of a very real concern for safety living openly as a trans person. Others are stealth because their gendered experience, whether related to their genitals or not, is nobody's damned business. Hopefully you also see how, as both genders, stealth is not really an option for my child. As their mother, I have to do everything I can to change the world to be safer for them before they are out in it by themselves.

It's my opinion that being trans shouldn't be a big deal, meaning we should all be able to openly explore and validate our experience of our own gender. Everyone's gender identity expression and experience should be accepted and respected without question in society. Unfortunately, that's not the way our society currently works. As a result, I'm writing until my fingers bleed about how people hurt my child when they misgender them. And, unfortunately, it does happen all too often. Please consider this list the next time you wonder how choosing not to use someone's pronouns (in other words, intentional misgendering) actually hurts them.

More Like This
Introducing My Boyfriend To My Kid
Experts Explain Whether It’s Safe For Your Baby To Sleep On Your Chest
Zaya Wade Is Rocking New Long Hair & As Gabrielle Union Put It, She's A "Vision"
I’m Getting Dual Citizenship For My Jewish Children, Just In Case.