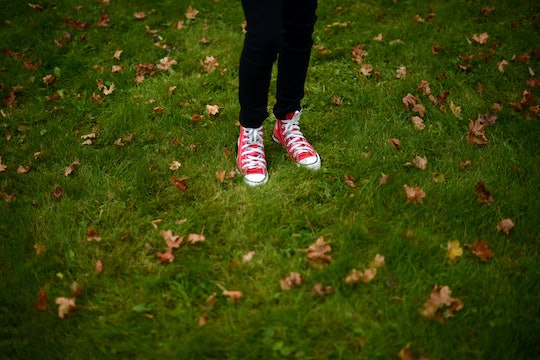 If you are a woman who still has trouble responding to unwanted male attention, get ready to meet your new guru. A 4-year-old girl shared her advice for a boy who had catcalled her and she has already figured out how to call out nonsense in a way that some of us grown up ladies still struggle with when we're worried about being rude.

The young girl's mother, Velinda Silva, tells Romper that she and her 4-year-old daughter Delilah were "at the running track so we can stretch and do yoga" recently. The mom and daughter were apparently having a good time together until "a young boy who was maybe 8 years old began making animal noises at her and motioning her to come over."

Well little Delilah was not impressed. Not at all. Silva tells Romper that her daughter got very annoyed, so much so that she asked if she could vlog about it. She sat in the back seat of the car and shared her side of the story. "I was just relaxing and a boy tried to get me over there and he said 'ca-caw! ca-caw!' and that's not how you get a girl to get over there."

Silva captioned the video, which has been watched 2 million times, "My 4 year old is literally a teenager." Or a self-help guru, depending on your perspective.

Delilah went on to explain that the boy continued catcalling her with literal cat sounds. "You have to use your manners. And he was saying, 'meow meow meow meow' and why would you do that to a girl? You don't call girls over like that. OK, guys?"

Her advice wasn't simply for that little boy in the park either. "Whoever I'm talking to, I don't care. If I don't know you, if it's Janice or my teacher, it will be fine. But if it's a stranger, I'm going to stop."

Delilah's new fans on social media gave her top marks for handling her business, with one Twitter user summing up the perfection of Delilah's response, "She said what she said. Use your manners but really if you a stranger leave her alone." Another user noted, "bro took the 'catcalling' a little too serious."

As for this fearsome 4-year-old, her mom tells Romper that Delilah is "very mature, very curious, and very intelligent." Truer words have clearly never been spoken.