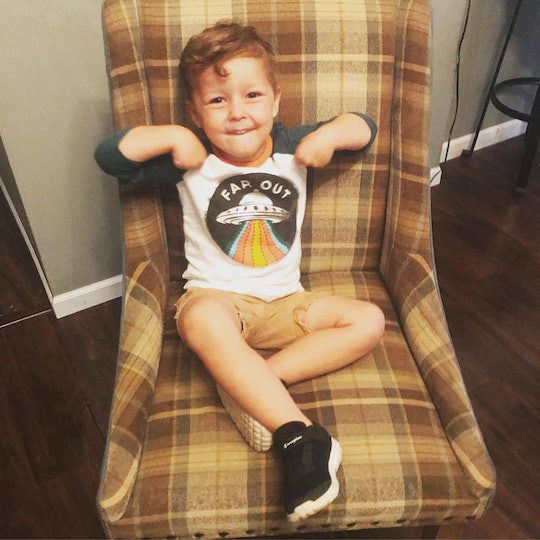 If I Had To Choose, 4 Is The Best Age

“Hey, handsome,” I hear a little voice chirp from the other side of the living room. I peek over the back of the couch to see my 4-year-old son admiring himself in the reflection of his Batman mask sunglasses. It’s the kind of moment that makes me wish my phone was permanently in my hand and set to video. Of course, I immediately texted my husband the whole conversation our son had with himself, and while my son hadn’t actually winked, I might have added that bit to the story for texture.

This is why 4 is the absolute best age. Four-year-olds have all the personality of kids, with the utter lack of self-consciousness unique to toddlers. My 4-year-old finds himself handsome and tells himself so, but he also carries out complex superhero battles with his action figures, is capable of nuanced conversation, and is still down to cuddle any time I ask.

It seems like only yesterday that we were struggling to change his diapers at the zoo, going on road trips and having to stop and take half-hour breaks every two hours so he could breastfeed. One particularly difficult dinner party with friends was spent chasing him down on repeat as he returned relentlessly to their fish tank to catch their Betta with his bare hands.

More than the relief that they aren’t babies, is the excitement of all that is to come.

Babies and toddlers are objectively adorable with their rolls of chub and intoxicating smell. But every time I shout, “Don’t forget to wash your hands!” down the hall, as my 4-year-old handles relieving himself without any assistance from me, I am reminded just how wonderful it is that my baby has finally transformed into an independent little kid.

My son is the youngest of three. He is the last 4-year-old I will ever have. Despite the freedom his newfound independence has created for me, I see the final vestiges of his babyhood in him and I recognize that this is it. We are in the final moments of the season where he will climb on my lap for a kiss and a story and beg me to marry him someday.

I’m a typically future-oriented person by nature and I’ve never been one for undue nostalgia. Babies are great, but it’s also a fantastic to be able to hand them back to their mamas with a forehead kiss, and an overwhelming sense of relief that I don’t have to be the one to change that stink bomb of a diaper. And more than the relief that they aren’t babies, is the excitement of all that is to come.

I’m an avid hiker and let me tell you, it feels so good to finally be able to drag all my kids down a moderate trail and know that they can handle it. Before long he’ll be dragging me down trails, joining me at the climbing gym, and reading me stories. I cannot wait! But with his graduation to those activities will come the loss of our beloved cuddle time.

That’s the beauty of 4-year-olds. It’s not a matter of waiting for them to grow out of or into new behaviors. Instead, it’s the beautiful age of transition between babyhood and childhood where parents get a little bit of everything.

Because, unlike their younger selves, 4-year-olds — like little adults — are keenly attuned to every place they go and every person they meet. But unlike actual adults, there is no baggage attached to their observations yet. The world is still a place of wonder and amazement. As their parents, we get to see the world through their eyes for the first time. As I mentioned, I have two older kids, and I know that this stage of intelligent magical innocence doesn’t last forever.

A year ago, if my son had caught a glimpse of himself in his sunglasses, he probably wouldn’t have recognized his own dapper appearance, let alone been able to articulate his appreciation for it with such wit. And in only a short time, the world will have its way with him, and he’ll know better than to vocalize such self-love without the necessary qualifier making sure everyone understands it’s just a self-deprecating joke.

But right now? Right now, he’s 4, and 4-year-olds are in that beautiful stage where they are old enough to recognize the truth and they are still young enough not to be afraid of it.

More Like This
30 Easy Summer Activities For Kids That Work Rain Or Shine
The Covid Vaccine For Kids Under 5 Has Been Sent To The FDA For Review
Should Parents Consider Delaying Covid Vaccines Until Closer To School Starting?
How To Properly Clean An Inflatable Pool