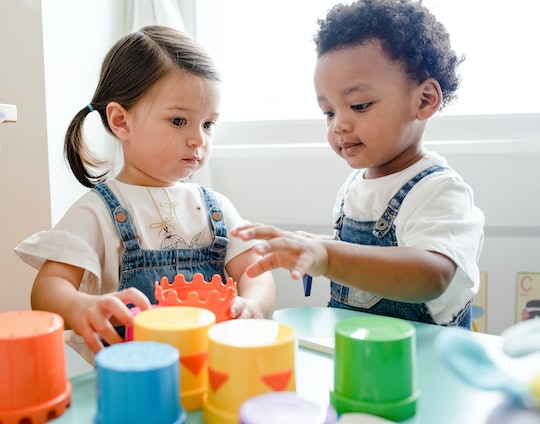 New Research Reveals Why Many Parents Have Turned Down Playdate Invites

I sort of feel like the phrase "playdate" is something of a misnomer. It gives a very carefree vibe, like arranging a playdate for your kid is this easy, joyful thing. But the reality is, as every parent most certainly knows, very different. Playdates can cause mountains of anxiety for the kids involved, the host parents, and the parents who are meant to be sending their little one off to someone's house for an afternoon of fun. So fraught with potential difficulties, in fact, that 48% of parents decline playdate invites because they're struggling to mine for background information, according to a new survey. There's a whole lot of research that needs to go into letting your kid head over to a stranger's house to play, and some parents simply cannot wrap their heads around all of it.

Researchers at C.S. Mott Children’s Hospital National Poll on Children’s Health at the University of Michigan recently conducted a survey of 881 parents with at least one child between the ages of 4 and 9. Researchers asked respondents questions on specifically how they felt about their kids going to playdates at the house of a new friend. And let me tell you, these parents had a whole lot of feelings on the subject.

If their child was invited to the home of a family the parent did not already know well, the study found that 45% of parents preferred to stay with their child for the entire playdate. And those were the parents who let their little one go in the first place. According to the research, nearly half of the respondents, 48% percent, said they simply would decline the invitation entirely.

Parents cited several concerns that had them hesitating to allow their child into an unfamiliar home for a playdate:

Of course, a lot of these concerns can be alleviated by getting to know the parent, something 84% of respondents said they would try to do ahead of the playdate. While 75% of parents would also ask whether or not the kids would be supervised, fewer of them were willing to ask about other concerns like weapons in the households or injury risks like pools or trampolines. Interestingly enough, only 1 out of 4 parents said they had been asked questions before hosting a playdate despite the fact that 73% said they would not be offended if a parent wanted to do some research ahead of time.

Obviously it can be incredibly uncomfortable asking people you haven't met personal questions, but the reality is that children benefit greatly from playdates. As study lead author and Mott Poll co-director Sarah Clark explained to Sci Tech Daily, "Playdates allow children to develop independence, gain experience interacting with other children in an unstructured setting, and have fun with a friend."

However, Clark also noted in the same statement to Sci Tech Daily that parents "need to feel confident that their child will be safe and appropriately supervised" before a playdate, and asking host parents certain safety questions can help.

Clark recommends devising a checklist of questions to ask parents and arranging a meeting ahead of time if possible. Because you don't want your kids to miss out on such an important aspect of their social development simply because you feel uncomfortable. And let's not forget the added potential bonus: Mom friends. They're kind of the best.