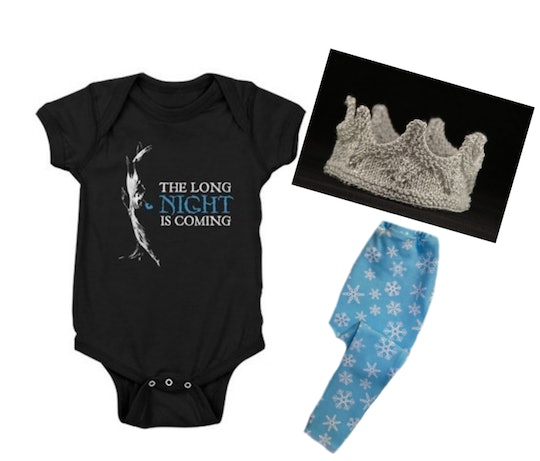 For Halloween 2017, there's no doubt costumes inspired by Game of Thrones will rule the streets. Even if your kid is still too young to watch the popular HBO drama, you can still use the show's characters for some amazing costume inspiration. In fact, the Game of Thrones Night King costumes for babies are so cute, your family might start rooting for the White Walkers and their mysterious leader. (Please note: this piece contains spoilers for Game of Thrones season 7, so proceed at your own risk.)

As one of the characters who was invented for the show, the Night King is a particularly fearsome villain. He's still something of an unknown quantity, although his displays of power so far have been particularly frightening. As someone who can turn children into White Walkers, raise the dead, and throw spears with alarming accuracy and distance, the Night King is the sort of major foe a show like Game of Thrones deserves.

Translating his icy look into a costume for a baby takes a little imagination, but some interesting versions of the Night King can be crafted from normal baby clothes. Of course your baby's look will ultimately be a lot cuter than the Night King's getup, but that's to be expected. Just maybe make sure your baby doesn't turn any other infants into White Walkers when you're out and about in costume, because that could become problematic.