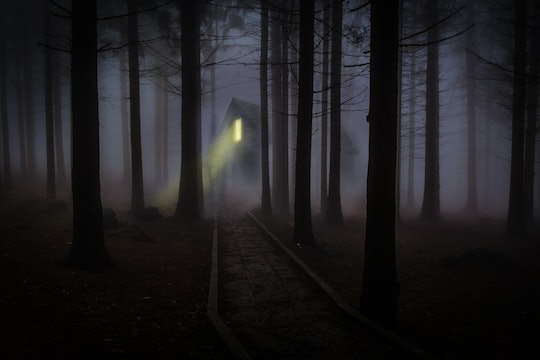 5 Halloween Poems That Will Give You Serious Goosebumps

There is something about human beings that just loves to be a little spooked. While some people enjoy going full-stop with the Halloween horrors, even those like me who don't naturally lean towards the ghoulish still find ourselves embracing the eeriness of the night. Horror movies are obviously big hits this time of year, but have you ever thought of gathering a group of your friends with some hot drinks, setting the ambience, and reading Halloween poems out loud in your best Poe voices? Try cranking up the chills with some of these spooky classics.

I'm not normally a big poetry reader, but I love the idea of swapping goosebumps with my friends on Halloween night and horror movies lost their appeal sometime after college. And is it just me, or are the suspense and intrigue of carefully crafted words actually more chilling than gratuitously bloody slasher films? I can definitely imagine getting in to the Halloween spirit by brewing up some hot toddies, pulling out the blankets and candles, and hitting the lights.

The five poems I've curated here are perfect for doing just that. Some set the stage and some bring it home, but all are guaranteed to make your hair stand on edge. So grab something hot yourself, have a read, and start planning your perfect Halloween night.

Longfellow is one of the most famous American poets to date, and if you need proof, consider the fact that Abraham Lincoln and Charles Dickens were among his most enthusiastic fans. The opening line of this poem is particularly freaky considering Longfellow's own beloved wife died tragically in their home, but the whole thing will have you on edge, so read "Haunted Houses" in its entirety to get the full effect.

All houses wherein men have lived and died

Through the open doors

The harmless phantoms on their errands glide,

With feet that make no sound upon the floors.

We meet them at the doorway, on the stair,

Along the passages they come and go,

Impalpable impressions on the air,

A sense of something moving to and fro.

2. "The Vampire" by Conrad Aiken

Written in 1916, 15 years after the poet found the dead bodies of his father and mother, these words are sure to be a crowd thriller. As Aiken is no stranger to horror, it comes as no surprise that "The Vampire" in its fullness is a completely creeptastic work.

And skeletons dancing to a tune;

And cries of children stifled soon;

And over all a blood-red moon

A dull and nightmare size.

They woke, and sought to go their ways,

Yet everywhere they met her gaze,

Her fixed and burning eyes.

3. "Round About the Cauldron Go" (Macbeth) by William Shakespeare

The iconic lines in this part of Shakespeare's 1606 masterpiece are among some of the most frequently read when Halloween rolls around 400 years later. Now that's longevity. Read "Round About the Cauldron Go" for some classic ghoulish and family-friendly fun.

In 1984, Louise Erdrich published the poem "Windigo" and introduced a fascinating Native American symbol to the non-native population. A Windigo is a flesh-eating demon with a man buried inside and, in some Chippewa legends, is defeated by a young girl. Brace yourself for this one.

In the hackles of dry brush a thin laughter started up.

Mother scolded the food warm and smooth in the pot and called you to eat.

But I spoke in the cold trees:

New one, I have come for you, child hide and lie still.

Is it even legal to make a list of Halloween poems and not include "The Raven"? This 19th century work of Poe has stood the test of time, and despite its intimidating length, continues to be a party favorite. Try this one on for size if you're looking for high-brow creepiness.

On the pallid bust of Pallas just above my chamber door;

And his eyes have all the seeming of a demon's that is dreaming,

And the lamp-light o'er him streaming throws his shadow on the floor: