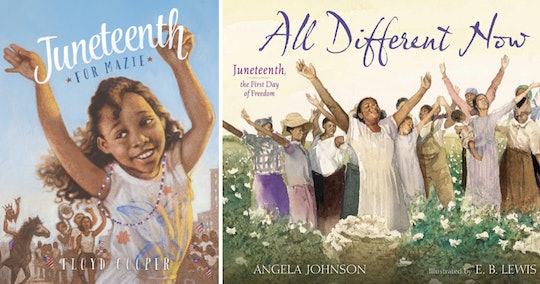 5 Meaningful Ways To Share Juneteenth’s Significance With Your Kids

Every year, millions of families mark the day when 250,000 enslaved people were finally liberated in Texas on June 19, 1865, with Juneteenth celebrations. But while many have long celebrated the historic event, some have only recently learned of it. For parents looking to educate their children about the holiday's significance, there are a number of ways to share and learn about Juneteenth with your kids through crafts, videos, virtual museum trips, and beautifully illustrated children's books.

While many Americans associate celebrations of freedom with the Fourth of July, the holiday doesn't mark a day when all people in the United States were free of tyranny. In fact, the enslavement of Black people in America continued for nearly 100 years after the signing of the Declaration of Independence. As a result, Black leaders like Frederick Douglas have long questioned the hypocrisy of celebrating July 4, 1776 as the day the nation gained its freedom. Instead, many Black people living in the United States celebrate freedom on Juneteenth.

Gloria L. Howell, the associate director of the Neal-Marshall Black Culture Center at Indiana University Bloomington, tells Romper that "it is extremely important for parents, teachers, and those who educate our children to ensure that they gain knowledge about Juneteenth and its significance."

June 19, 1865 marks the day when Major General Gordon Granger marched into Galveston, Texas, to deliver the news that all slaves were now free. It's important to note, however, that Granger's arrival in Galveston came more than two years after the Emancipation Proclamation was signed in January 1863. That's one of the reasons why marking Juneteenth means grappling with the full effects of slavery's legacy and with how freedom and justice has been historically — and continues to be — delayed for Black people in America.

"It's not only about Juneteenth," Howell says, "but acknowledging and honoring the history of African American life in a comprehensive and accurate way."