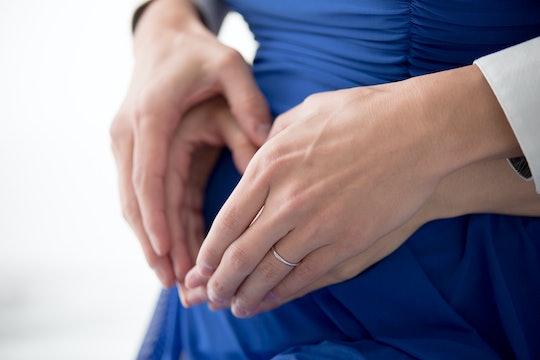 I heard a lot of old wives' tales when I was pregnant, but I didn't put any thought into them until someone told me sex could cure morning sickness. And the thought I put into that? "Oh hell no." Look, sex during pregnancy can be great, but as someone who had her head in the toilet every morning for about eight to nine weeks, the thought of heading to the bedroom before or after my sacrifice to the porcelain throne made me want to puke again. Seriously, can you think of anything less appealing? Sex while nauseated? No thank you.

But maybe it could've cured my vomiting. That tale is one of five old wives' tales about first trimester pregnancy sex and let me tell you something, they will all make you think. Some will make you feel a little panicky, but here's the thing — old wives' tales are exactly what they sound like. These aren't really backed by evidence or science, so while they're fun to share with friends or stress yourself out over, they aren't really worth committing to memory. (Unless sex does cure your morning sex and then hey, get it, girl.)