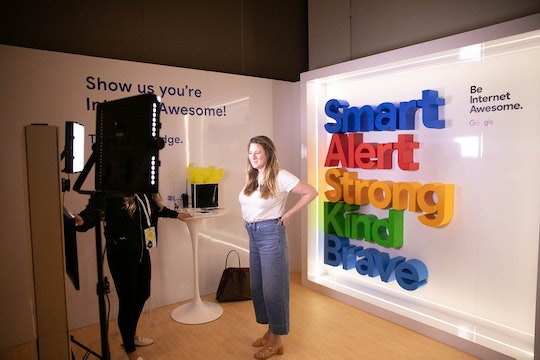 Several years ago, elementary and middle school teachers across the country began raising a common concern: cyber bullying was rampant, and fortunately, a national conversation had started around it, but they had no way of using their work in the classroom to combat it. “It was happening on social networks where teachers don’t have visibility,” says Jessica Covarrubias, program lead for Be Internet Awesome, the initiative that Google — yes, the Google — came up with to address bullying and the larger question that parents and big internet and social medias companies share: how do we keep kids safe online and teach them digital responsibility in the process?

As Covarrubias shared on the ground at this year’s Mom 2.0 conference in Austin, TX April 24-26, Google launched Be Internet Awesome for educators in the summer of 2017, complete with a curriculum “designed to reinforce lessons in the classroom” and also an online game, Interland, that kids loved. When parents heard about the programming, they wanted a version for themselves, especially since some recognized that in many cases they weren’t the most educated or responsible digital citizens that they could be. Be Internet Awesome launched its family guide in February of this year. The strategy, Covarrubias says, is “targeting all key adult figures in child’s life to help kids navigate the internet more safely.”

While Covarrubias wouldn’t say exactly how big a financial commitment Google has made to the program, she described the company as “heavily invested" in Be Internet Awesome, describing it as a "marquis program,” and that certainly seemed true walking through its activation at Mom 2.0, where Romper was a 2019 national media partner.

Recognizing that many parents do feel lost as to how to help their children navigate their digital lives in educated and empowered ways, the buildout took the form of a bright, pristine white labyrinth conceived by Crown + Conquer and constructed by The Lab. “We’re walking moms through an internet maze to think through how you navigate it with your children,” Covarrubias says.

There were five stops, each with a guided interactive experience of one facet of the program. After completing each part of the activation, they got a stamp on a passport that they turned in at the end for a drink from Texas juice joint Juiceland, local Austin coffee supplier Creature Coffee, and a doughnut from Voodoo, the local viral doughnut sensation, to ring around the straw. A photo booth with an Insta-worthy backdrop encouraged attendees — many of whom are mega influencers in the parenting space, with tens or even hundreds of thousands of followers — to spread the word about the program to other parents.

Be Internet Awesome has five pillars: Be Smart, focused on educating kids about what they should and shouldn’t share online; Be Alert, which teaches them to recognize phishing and #fakenews; Be Strong, teaching them about creating strong passwords; Be Kind, focused on combatting cyberbullying with positive social media behavior; and Be Brave, which gives them the language and tools to approach a trusted adult when they come across inappropriate content (which, let’s face it, they will).

Like the programming for educators, Be Internet Awesome for parents is totally free and does not require any login. There is no data collection from kids using Interland (collecting data from children is illegal anyway), no advertising on any aspect of the program, and it’s platform agnostic, meaning the information is not intended just for Google and Android users.

Conscious of disparities in access, Google made sure the program is free and offered in all 50 states in English, Spanish, and nine other languages. According to Covarrubias, Be Internet Awesome also partners with the national PTA to offer workshops for digitally disadvantaged parents.

It’s been so popular — and so effective — that teachers are now asking Google for a teen version.

Our cruise through the #BeInternetAwesome activation and Family Guide yielded these five questions you should be asking to ensure that your kids are safe online:

More Like This
13 Is "Too Early" For Kids To Be On Social Media, Surgeon General Cautions
101 "Would You Rather" Questions For Kids
6-Year-Old Boy Has Zero Regrets After Ordering $1,000 Worth Of Food On Grubhub
The Power Of Being A Funny Girl
What Parents Are Talking About — Delivered Straight To Your Inbox