She was previously BDG's Director of Features and Brand Initiatives, overseeing all digital issues across brands, and she has served as the managing editor of both Bustle and Romper, which she launched in 2015. Before coming to BDG, she was the founding editor of Huffington Post Women. She also worked at Babble.com during the Mommy Bloggers’ true heyday, and she was once a very unsuccessful features assistant at Vogue.

She is a graduate of Princeton, got her masters degree in journalism through NYU's program in Cultural Reporting and Criticism, and has taught graduate students in the Publishing department of NYU's School for Professional Studies.

In her own writing and reporting, she focuses on stories that challenge traditional ideas about what it means to be a woman, a mother, and a family. She also covers eating disorders, dieting, and body image, and she once wrote a rousing ode to the children’s book Giraffes Can’t Dance.

Originally from New Orleans, she lives in Manhattan with her wife, four children, and a vizsla named Clay. 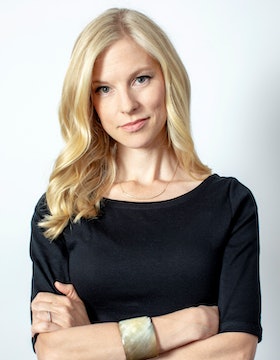 The Nonmonogamous Moms Next Door

Ten months after her husband died, Rebecca Woolf posted on Instagram that she was in a new relationship.

18 Moms Share The Most Important Thing They Accomplished This Pandemic

Don't worry, no one finished their novel.

To The Trump Voters Who Say It Isn't Personal

Your Kid May Not Be Vaccinated Against Meningitis B, GSK Tells Moms AT Mom 2.0

At The Mom 2.0 Virtual Summit, Even Mega-Influencers Admitted To Work-From-Home Chaos

At Mom 2.0, Medieval Times Brought The Fun (Plus Yoga)

How To "Collab" In A Way That Pays Off

The Busbys Are Getting Good Feedback — EXCLUSIVE

When You’re Pregnant With An Eating Disorder, You Can’t Just Stop “For The Baby”