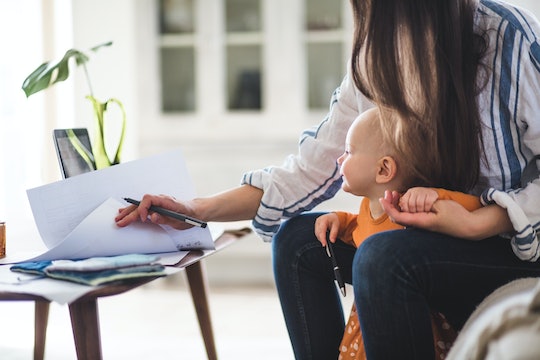 At The Mom 2.0 Virtual Summit, Even Mega-Influencers Admitted To Work-From-Home Chaos

One thing I noticed chatting through the many Zooms of Mom 2.0’s first ever all-virtual Summit this year — aptly named Mom 2.0 Everywhere — is how parenting in 2020 is so different, so exponentially harder, and also fundamentally the same. Amid tough financial circumstances, political turmoil, health fears, and logistical chaos, our kids still need us as much as ever. The age-old tension between being there for all of their fears and questions and tantrums and doing the things we need to do to keep ourselves going has only intensified.

The Summit itself, of which Romper is a media partner, also felt both the same and wildly different. “Are we all in just a video game?” I asked Mom 2.0 cofounder Laura Mayes in a phone call Tuesday that she took while in the “lobby” of the conference app where people were actually gathering to chat. There were lots of new faces, many ecstatic to attend after not having the funds or childcare to do so in person in previous years. The newcomers fell in easily with “Mom 2” lifers who wait all year for the specific high of a late-night lobby margarita with women you just met but somehow understand you better than your home friends. Even virtually, the conversation found its familiar rhythm: In the Romper “suite” Thursday, a discussion of what makes a good essay pitch took a hard left into a comparison of VBAC experiences, and everyone present was there for it.

You learn two things immediately at the Mom 2.0 Summit, whether it convenes in a sparkling hotel a plane ride away from your children or on a conference app as you manage three other screens not your own:

1. Everyone does the homework, and no one thinks it’s uncool. This is a conference where people take notes. Your fellow attendees have invested in being here so they can grow their businesses, often while supporting their families in all of the other ways. There is none of this nonsense about effortlessness. Everybody is here to work.

2. People have real conversations. Even if their blog is filled with spotless children, floors, dogs, plus homages to silver linings and quality-not-quantity time, most every conversation ends up being a mix of potty training and Q4 goals and people you should talk to and advice on the impending Thanksgiving drama with your sister-in-law, and it’s all just… normal?

This year’s Summit kicked off with a panel sponsored by WaterWipes, a Mom 2.0 Everywhere official sponsor, on how parents, especially parents of young children, have coped through the pandemic. The panel, hosted by veteran blogger and mom of four Jill Krause, featured: mom of four and YouTube's favorite OB-GYN Danielle Jones (can you imagine delivering babies in this? good god); dermatologist Laura Scott (who had her fourth baby three months ago!); and Hannah Williams, mom of three, executive producer of Buzzfeed’s Tasty, and host of the Buzzfeed show Mom in Progress. (Managing a team, having your own show, being home with your kids with no childcare and a spouse also working full-time — what could go wrong???)

Still, they offered up some strategies they’ve employed to hold things together, even if they are far from ideal: Jones gave up her private practice, which means she’s still delivering babies in the hospital and seeing patients via telemedicine appointments (and posting on YouTube, and her children are doing some sort of nature-based home learning program in the mornings that sounds very ambitious), but for now she’s had to relinquish most of the surgical practice she loved. Scott has had to limit her clinical work to one day a week because her spouse’s role as an ER trauma physician means she’s parenting solo. She has focused more on lecturing, which she can do with a closed door and a babysitter. Pausing your career is not the long-term plan for either of them, and it can feel pretty terrible — “we’re having to give up things that really drive our creativity,” Krause noted — but it’s getting them through for now.

Parents are valuable in the work force, and a lot of the time we’re made to feel like we’re not as valuable...that’s not true.

For Williams, one positive has emerged: in order to hang onto the last shreds of sanity, she has finally allowed herself more work-life balance. “I’ve stopped filming on the weekends, which I never thought I would do,” she says. She's trying to keep in mind that what she offers professionally is worthwhile, even if she doesn't make herself available at any hour. “Parents are valuable in the work force, and a lot of the time we’re made to feel like we’re not as valuable, or like we’re a burden for wanting work life balance. And that’s not true,” she says.

This honesty was a very Mom 2 way to kick off the conference, and it just so happened to echo WaterWipes’ ongoing messaging to mothers and anyone responsible for very small children: perfection isn't possible. Using the hashtag #thisisparenthood, the brand encourages parents to dismantle the myth that everything in your house should be beautiful, neat, and excellent at at all times. Especially with kids, fun and joy are still very accessible. But maybe in a pandemic, we can give ourselves a break.

More Like This
Zoe Saldaña Shared A Rare Video Of Her Three Sons Recreating A 'Zoolander' Scene
I Took Drinking Out Of My Bedtime Ritual & Unfortunately, It's Great
Jacinda Ardern No Longer Has “Enough In The Tank” & Moms Know Exactly What She Means
A Dad Asked Reddit If His Wife’s “Casual” At-Home Wardrobe Was Setting A Bad Example
What Parents Are Talking About — Delivered Straight To Your Inbox