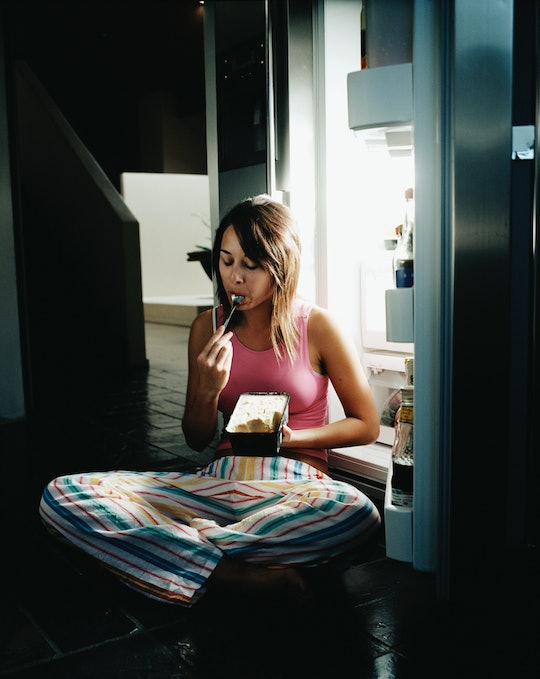 The rules of self-care tell us that sleep, water, healthy food (mostly plants, not too much, thanks Michael Pollan), movement, and a few minutes of quiet every day are the key to that unusual sensation sometimes called "wellbeing." In normal times, moms struggle to give themselves these things. Sleep? Meditate? That's adorable. Now, two months into a pandemic that has turned most mothers into full-time caregivers and tutors, these directives are borderline infuriating.

It's no wonder, then, that according to new data, moms' self care is slipping, fast. In April, Romper ran a Pollfish survey of 2000 mothers across the U.S. to ask them how they are coping in the pandemic generally and specifically with the additional stress and work involved in having their kids at home. Twenty-seven percent of moms with kids 0-12 years old told us they are eating more daily with an additional 24% saying "almost" every day. Seventeen percent say they are drinking more alcohol (plus 14% who said almost every day), 37% say they are staying up later every night, and over 60% are "spending too much time on social media" (34% said every day and another 27% said almost every day).

Moms who have been laid off... have the highest rates of eating more, drinking more, staying up later, and being on social media more.

The numbers are bigger for those out of work due to the pandemic. While essential workers aren't engaging in these behaviors as much as other moms, moms who have been laid off, furloughed, or suddenly have no clients, assignments, orders, etc. have the highest rates of eating more, drinking more, staying up later, and being on social media more than they think they should. Thirty-one of these moms said they are eating more daily, 27% almost daily. Seventeen percent said they are drinking more daily, 48% said they are staying up later, and 43% said they are spending too much time on social media.

Among Hispanic moms, 35% reported eating more, 17% drinking more, 42% staying up later, and 42% being on social media too much every day.

For comparison, 22% of white moms said they are eating more, 14% said they are drinking more alcohol, 32% said they are staying up later, and 31% reported spending too much time on social media platforms every day.

This data comes with many caveats: Moms assessed themselves in the survey, so the results are subjective, not empirical. We didn't ask if moms thought that eating, drinking, or staying up later was bad for them, so we don't know how they feel about it. Do they understand increased eating as a stress response that they need to be kind to themselves about, or are they still assessing themselves according to the intake and body shape prescribed by the $72 billion diet industry? What many respondents deem overeating may actually be a normal amount of food, meaning women could finally be granting themselves a reprieve from restriction, which study after study has shown leads to bingeing. We don't know.

What many respondents deem overeating may actually be a normal amount of food, meaning women could finally be granting themselves a reprieve from restriction.

Similarly, we don't know how moms feel about increased alcohol intake. There's been a lot of messaging online, especially via memes, that drinking more in quarantine is normal and thus a way of belonging to the legions of moms uncorking at 4:59 p.m. Others have pointed out that we should watch this behavior carefully, since true addiction thrives on isolation and can be easily masked by the notion that every mom has the proverbial vodka in her sippy cup.

We also didn't ask moms what they were staying up to do, so while it's a fair guess that those extra hours awake are being filled with the one or more additional hours the 56% of moms told us they are spending planning their kids' activities, they could also be occupied with Netflix.

We left it to them to determine what "too much" social media meant for them. We know that feeling isolated is associated with increased social media use, and there is evidence of a causal relationship between social media and depression. We also recognize that in these extraordinary circumstances, social media is allowing people separated by self-isolation to gather with others. Respondents could comparing their real lives to the edited image they're scrolling through (which we know is harmful), or they could be keeping up with far-flung family, or a mix of the two.

What we do know is that moms told us they were worrying about their own health last — after their parents, partners, friends and family, and their children. (We ran the survey before reports of multisystem inflammatory syndrome emerged.) If you're not thinking of your own health, you're more likely to let your best self-care practices slide.

The moms we surveyed didn't ask for the following, but we will: widespread testing and tracing.

This is disheartening on its face — moms deserve to care for themselves as much as anyone — but in light of the additional responsibilities mothers are saddled with right now, taking care of yourself takes on new urgency (and adds pressure). If you feel sick, you can't bring in a last-minute sitter, even if you can still afford one. If you are eating or drinking more than physically feels good, getting up early with young children may become even harder. You need sleep more than ever because sleep deprivation makes anyone more reactive, and if there's one thing kids stuck at home are going to do, it's try to push your buttons. And knowing you need to be at your best when your impulse to check out may be the strongest it's been in years — again, many of us are trapped in our houses with our children, if we're lucky — inflicts additional stress. No one wants to be treating themselves badly, but the last thing you need when you're struggling to not eat, drink, or be on your phone more than is good for you is the idea that doing so — doing something, even if it's not the best thing, to soothe yourself — is undermining your whole family's wellbeing. When does a mom get a break?

All of the survey data points to the longstanding need for more government-mandated structural support for moms all the time. In this highly unusual and challenging time, moms said they specifically need financial support and free activities for kids that help them not fall behind in school. Those with jobs outside the home need extra flexibility and an occasional thank you from their employers. And the moms we surveyed didn't ask for the following, but we will: widespread testing and tracing. It's the only way our children return to school, and moms get back to a version of the juggle that wasn't easy but at least allowed occasional moments to breathe.