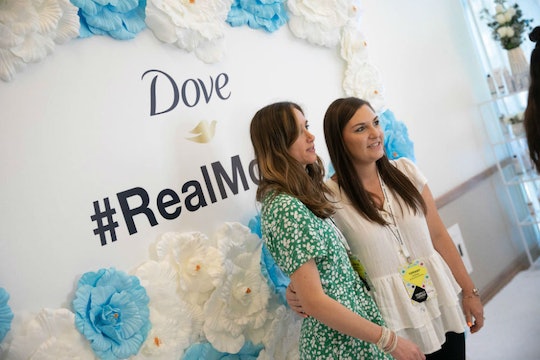 Do you see yourself when you click between tabs at work or scroll social media on your phone? Are people like you, parents like you — with your skin color, gender identity, family structure, body type, financial situation, phase of life — represented on the sites you visit and accounts you follow?

For years now, Dove, the Unilever-owned self-care brand, has used its marketing campaigns to celebrate women’s actual bodies and lives instead of perpetuating the myth that if you just lost weight or had more money, you would be enough. At this year’s Mom 2.0 conference in Austin, Texas April 24-26, Dove was on the ground promoting a recently-announced 2019 initiative that takes that approach to the next level. For its #ShowUs campaign, the brand partnered with Getty Images and Girlgaze, a network of female and non-binary photographers across the globe, to create more realistic stock photography of women around the world.

One experience desperately in need of accurate representation is birth. This year a major focus of Baby Dove, Dove’s line of baby products, will be acknowledging the multitude of ways birth actually happens, rather than a single, “normal” portrayal of what goes down. Amy Stepanian, Marketing Director for Dove & Baby Dove USA, tells Romper that Dove "aims to build the confidence of all new parents to trust the decisions they make for their families. This goes for birth experiences, which can be as different as we are."

Since Mom 2.0 is attended by major #influencers who spend a lot of time looking at photos on the internet, they are in a unique position to know which aspects of parenting get represented online — both in stock photos and in what people share on social media — and which don’t.

During Mom 2.0, Romper asked several of them to name one aspect of parenting they never see depicted realistically — or at all — on the internet. You may never have noticed that these aspects of the reality are missing from how parenting gets portrayed, but after reading this, you may notice their absence everywhere:

BABIES AREN’T CLEAN WHEN YOU MEET THEM — AND USUALLY, NEITHER ARE YOU

"When you first meet the baby it’s not realistic. The baby is cleaned up. The mom looks alive. There should be a range. There should be the c section bandages, the home birth baby you’re a mess and this is natural. I don’t think there’s enough baby meeting mommy moments."

"Social media is so tough when it comes to parenting! The visual nature of social + the feeling that one needs to curate and filter every moment makes it really hard to feel and express the full range of emotions (OMG so many emotions!) one experiences as a parent. Failure and humility is something that's less captured online. Yes, of course, people joke about #momfails, but growing and moving forward from moments of failure requires humility. I write with some regularity on Instagram about failure and humility and parents are always overwhelmingly appreciative to see their struggles reflected in those moments of candor."

“It often seems like parenting is presented as one of two opposing sides. You’re either in total despair and breaking under the pressure OR you’re exuberant, killing it, and making things look effortless. I’d like to see more gray in the world of parenting. So many days are. We aren’t always crumbling but we aren’t always crushing the job. Sometimes we’re just doing the work, straight down the middle, and walking steadfastly forward with our hands firmly grasping sticky fingers. We are just living and breathing and it’s OK to just ‘be’ sometimes. We don’t always have to be wildly something or the other.”

"To me there are many aspects of parenting that aren’t shown quite right on social media. And many aspects that we talk about lightheartedly when in reality they affect us on a deeper level. To name one: loneliness. It’s hard to convey how alone a mother can feel with photography, so maybe that’s why we don’t talk much about it. There are the friends who don’t ask us out anymore, as if us becoming moms changed the core of who we are. There’s the anxiety that prevents us from [wanting to go] out, but also the general exhaustion too. Therefore, we enter a vicious cycle of not being able to get out of the house, a place that’s both a comfort and a little like a prison.

I think the feeling gets even stronger for special-needs moms because they can’t relate to what 'typical' parents are going through. They’re of course 'moms,' but their struggles are different than other moms', so they relate, but not completely."

NOT ALWAYS LOVING BEING A MOM

"I think the highs of motherhood are portrayed often and well on social media. Everyone lives their best mama life on social media. The lows of motherhood (postpartum disorders, dealing with kid's behaviors, exhaustion, guilt, challenges of balancing a career, etc.) are definitely not visually portrayed well on most individuals' social media accounts. The average mama probably doesn't want to share with the world that she doesn't love being a mama sometimes or that she's super exhausted.

The good news is that I think women are becoming more open and honest which makes everyone fell less alone."

BY SHOWING IT—WHATEVER YOUR “IT” IS, YOU MAKE IT SAFER FOR OTHERS TO DO THE SAME

"One thing that is rarely depicted realistically when it comes to parenting is how many moms suffer in silence. 50% of all pregnancies end in miscarriages yet so few women talk about their losses. It wasn't until I started speaking openly about my miscarriage and stillborn loss that other moms came forward to share their experiences."

Have you taken photos of motherhood that you think could help fill in these blanks—or ones you’ve noticed yourself? Part of Dove and Getty’s #ShowUs campaign is a call for real, live parents to submit their pictures to help fill out the larger picture and story we are all invested in telling. "We’re encouraging women to help us expand the definition of beauty by telling us what they want to see more real images of," Stepanian says. To contribute, head to Dove.com/ShowUs to share your images for a chance to become part of the #ShowUs photo library — and help other women see that they aren't alone.

All photos courtesy of Dove or Mom 2.0.

More Like This
10 Of Julia Louis-Dreyfus' Best Quotes On Motherhood & Raising Her Sons
Mom Gives Birth To Record-Breaking 16-Pound Baby
I Took Drinking Out Of My Bedtime Ritual & Unfortunately, It's Great
Jacinda Ardern No Longer Has “Enough In The Tank” & Moms Know Exactly What She Means
What Parents Are Talking About — Delivered Straight To Your Inbox