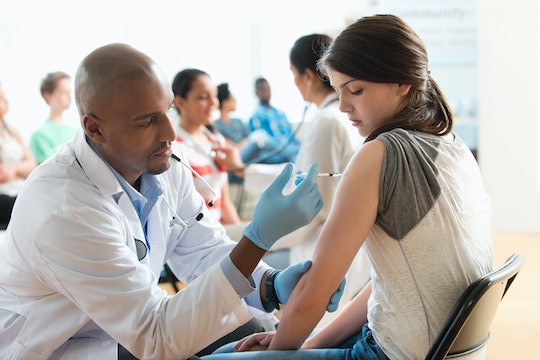 Your Kid May Not Be Vaccinated Against Meningitis B, GSK Tells Moms AT Mom 2.0

It’s October, which in a normal year means kids beginning to give any number of child plagues to each other and then to you. In 2020, of course, that may be different. So many kids are learning remotely, it’s unclear whether the usual bugs will get passed around as easily. What that does NOT mean is that we shouldn’t keep vaccinating our kids. At the Mom 2.0 Summit last month, held virtually this year due to COVID-19, presenting sponsor GSK (short for GlaxoSmithKline), the international pharmaceutical company, was on hand to discuss just that.

More Like This
Even Elmo’s Dad Has Gotten Vaccinated Against COVID-19
10 Hilarious Tweets That Perfectly Capture What Moms Are Going Through
Ohioans Could Win $1 Million Or A College Scholarship If They Get Vaccinated
Fries, Beer, & More Free Stuff You Can Get If You’re Vaccinated

GSK was talking to attendees about the Meningitis B vaccine specifically, which it produces. Meningitis B — the common name for invasive meningococcal disease B — is caused by a bacteria that one in 10 adolescents and young adults carry in their noses, according to Leonard Friedland, M.D., a Philadelphia-based pediatric infectious disease specialist and Director Scientific Affairs and Public Health at GSK. Most of those carriers are asymptomatic, but as we have had drilled into us in during the COVID-19 pandemic, for diseases spread by droplet, asymptomatic carriers can and do pass them on. “When you carry something in your nose, you're going to spread it,” says Friedland, “from coughing, from sneezing, from saliva, from kissing, from sharing the red cups.” Those on college campuses are particularly at risk, given the close quarters and intense socializing that go on. “Every outbreak of meningitis on a college campus in the United States has been caused by group B,” Friedland says.

When you carry something in your nose, you're going to spread it, from coughing, from sneezing, from saliva, from kissing, from sharing the red cups.

Again, those who have Men B usually don’t get sick, but in rare cases — and doctors aren’t exactly sure why — it can get into the bloodstream. When that happens, patients experience a rapid onset of disease that can cause “brain damage, deafness, kidney failure, and lower limb amputation,” according to a 2016 paper published in the journal Pathogens and Global Health. In 5 to 15% of cases, it causes death.

If you have a teen or young adult child and are thinking to yourself, “My kid was vaccinated against meningitis,” you’re almost certainly right. There are five common strains of bacterial meningitis, and all pediatricians administer a vaccine that prevents four of the strains (A, C, W, and Y). However, doctors don’t automatically vaccinate your child against Men B, despite Men B being by far the most common strain.

There is a separate vaccine for Meningitis B, approved almost 10 years after the vaccine that protects against the other strains came to market. The Men B bacteria is built differently, so a different vaccine was needed. It has only been available since 2014 and recommended since 2015, but since relatively few kids get extremely ill from meningitis, doctors aren’t required to administer it. Rather, the CDC recommends that they discuss it with individual patients and their parents in what’s called “shared clinical decision-making.” Given everything else they are thinking about in treating teens — HPV! drugs! sports injuries! — many pediatricians don’t do that, Friedland says, and parents don’t know to ask for it. As a result, only 21 to 22% of adolescents have received the vaccine.

As the producer of the Men B vaccine, GSK obviously has a special interest in encouraging parents to vaccinate, but the stories of teen and young adult victims of Men B are pretty chilling.

Even though now people are not attending classes in college, many of them are living on campus. Also, people are out doing other things. The recommendations have not changed.

An easy first step to making sure your kid is safe — from Meningitis B, at least — is to call your pediatrician to see if your child has had the Men B vaccine. If they haven’t, you can have that conversation with their doctor now. Also, because the vaccine is recommended, it is covered for young adults under the Affordable Care Act and for those under 19 by the Vaccines for Children program. If your kid does get vaccinated, you have one less thing to worry about as you try to get them to maintain some kind of social distancing amid the pandemic.

Which brings up one last thing: If your college-aged kid is not attending classes in person this fall, they can still get Men B. There’s a reason COVID is spiking among young adults: they are socializing. “Even though now people are not attending classes in college, many of them are living on campus,” Friedland notes. “Also, people are out doing other things. The recommendations have not changed.”