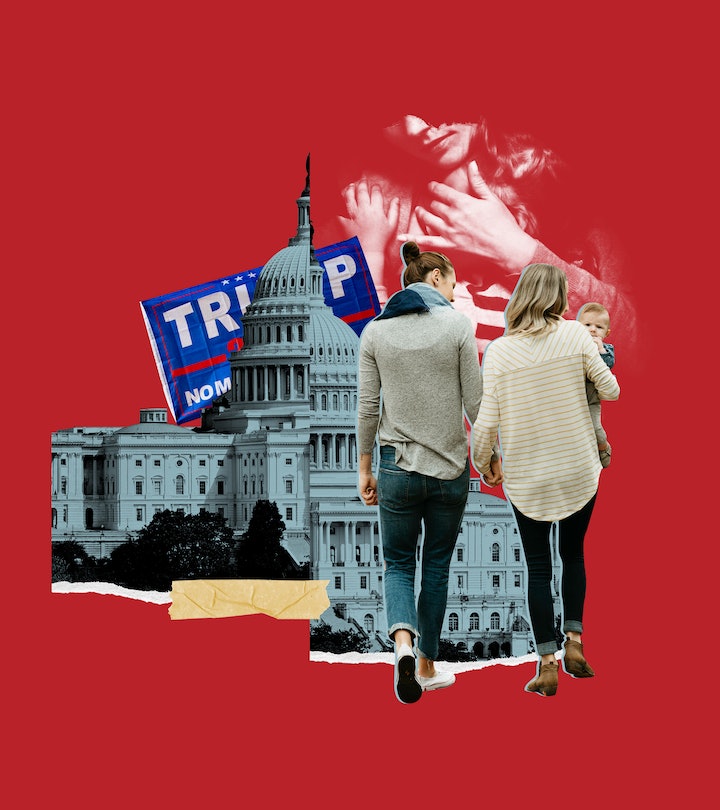 To The Trump Voters Who Say It Isn't Personal

All of The Handmaid’s Tale, the Hulu series based on Margaret Atwood’s dystopian novel, feels hauntingly prophetic in Trump’s America, but one scene from Season 2 never leaves me. Emily, a scientist, and her wife and son are at the Boston airport, attempting to flee to Canada, where her wife is a citizen. Following an alleged terrorist attack in Washington D.C., martial law has been invoked, but it’s really a military coup. The new authorities are in the process of establishing a Christian theocracy.

Emily and her wife have taken a precaution that my wife and I also take: They are traveling with their marriage certificate. When they are stopped, an ICE agent looks over it and says simply, “The document is no longer recognized. You are not married.”

Emily gets left behind.

In our family, we actually travel with more than our marriage certificate. We also bring the kids’ birth certificates, which list both of our names, and proof of our second-parent adoption of each child. Even though the first two were more than enough, we hired the prevailing gay parent law firm and had the social worker visits and went to family court — twice — to adopt our own children. “Just in case,” our attorney always said.

When our younger daughter was born right after Trump was elected, we almost didn’t pursue the second-parent adoption. Our lawyer convinced us to do it. 'You don’t know what Trump is going to do,' she said.

At the time, the scenario we were insuring against was so remote, we never bothered to articulate it. For lesbian and gay Americans, the years from 2013 to 2016 were a golden age: our first experience of equality before the law. New York state made same-sex marriage legal a week before we tied the knot. When our first daughter was born, both our names were automatically on her birth certificate, and when she was 5 months old, the Supreme Court struck down the Defense of Marriage Act (DOMA), legalizing gay marriage in all 50 states. That meant it was even legal in Texas, where my mom was subjected to conversion therapy in the ’60s, and Louisiana, where I grew up and where most of my sister’s class at our Catholic school ostracized her when they found out my mother is gay.

It’s hard to convey how inconceivable gay rights were 30, 20, even 15 years ago.

In 1994, Ellen Degeneres lost not just her show but her entire career when she came out on national television. The year before, Bill Clinton issued “Don’t Ask Don’t Tell,” a military directive that allowed gay people to serve if they remained closeted, a compromise struck because the idea of openly gay soldiers was incomprehensible. In 1996, Clinton signed DOMA, which defined marriage, federally, as a union between a man and a woman. As late as 2012, Joe Biden got in trouble for saying on Meet the Press that he supports gay marriage before the Obama administration had decided it was time.

And then, thanks to relentless work by the ACLU, Lambda Legal, and many other advocacy groups, as well as the courage of generations of gay people who dared to be out and show how boringly normal they were, it all happened.

There has rarely been a more rapid acceleration of rights for a group previously deprived of them. Black Americans, after all, are still waiting for the full recognition and protection of their civil rights. It has been 400 years.

For the first year of our older daughter’s life, we dutifully traveled with our thick folder of documents, but it began to seem a little silly. No one ever asked us for them, even in Florida, even in Texas. No one cared. My biggest nightmares were more or less similar, I assume, to any parent's: freak accidents, the kids growing up to hate me, someone getting really sick. I have a very specific one where one of them gets drunk at college and climbs a small construction crane.

When our younger daughter was born right after Trump was elected, we almost didn’t pursue the second-parent adoption. Our lawyer convinced us to do it. “You don’t know what Trump is going to do,” she said.

Most of the outrage around Trump’s social policies has focused on his most egregious feats of inhumanity to date: separating migrant families, imprisoning infants and toddlers, and failing to keep track of their parents. Attempting to enact a Muslim ban. Banning trans Americans from the military. Saying there were “very fine people” among the violent white supremacists in Charlottesville. Giving sanction to abortion restrictions that essentially limit access to rich people.

What if we became the women at the airport, the careful papering of our life suddenly worthless, because someone else decided we should not be a family?

These are all absolutely worthy of outrage. But in the leadup to this election, I increasingly thought about where the Trump administration would train its searchlight next, during a second term where there would be even fewer checks on its power.

Which identity or ethnicity would it seek to erase in the name of a whiter, more patriarchal America? What if the next target on that list was us? The Trump administration obviously has no problem separating children from parents it deems Other. And while I don’t think Trump himself actually believes in curtailing LGBTQ+ rights — I don’t think the president sees much value in moral crusades, except as a tool for manipulating those who do — he has no problem enacting items on the evangelical policy wishlist in exchange for power. What if we became the women at the airport, the careful papering of our life suddenly worthless, because someone else has decided we should not be a family?

It is stunning how comfortable so many Americans are with Trump’s past wrongs and his promises of more to come if the election ultimately swings his way. Nearly half of voters said they want four more years of this, that they’re fine with it.

Some of those supporters are self-declared white nationalists, and others openly admire his unconcealed hubris and misogyny. Their votes are not a surprise. My disappointment and bafflement and fury focuses on the people, all of them white, who admit on Facebook that “the president may be a jerk” but voted for him because they care more about how he might benefit them than how he has harmed people who are not them.

In huge swaths of the country, in my hometown, among my own relatives in red states, people do not believe they are responsible for how their vote impacts other people. They seem to think they can vote for Trump on the issues they care about without having any relationship to his actions on issues that do not affect them. It is a remarkable dissonance.

My recent conversations with extended family suggest that the dissonance is unshakeable, but occasionally I try, mostly because I like to make people who vote against my rights uncomfortable. Usually I post extra-wholesome photos of our children and pair them with the irrefutable facts of us:

My wife and I were able to get legally married only because the Supreme Court decided DOMA was unconstitutional. Our children were deemed ours from the moment of birth only because the law in our state changed to allow same-sex parents on birth certificates. These decisions and laws could be reversed and repealed, as could state laws permitting same-sex couples to foster and adopt. All it would really take is political incentive to do so. Would you put that past this administration? Is the possibility of some discomfort in your otherwise safe white life worth taking that chance with mine?

While your family’s future will never depend on me, my gorgeous, once unthinkable life depends on you.

I usually stop there, but this week, as the possibility still looms of a second Trump term, I’ll say more to those voters: While your family’s future will never depend on me, my gorgeous, once unthinkable life depends on you.

One thing people like to tell themselves is that equality is already a given, that discrimination is over or at least overblown. Women, people of color, LGBTQ+ people have nothing to worry about!

Let me tell you about something that happened just this week. Yesterday the Supreme Court heard Fulton v. City of Philadelphia, a case in which a Catholic social services organization claims the U.S. Constitution protects its right not to place children with gay foster parents. In oral arguments, Justice Kavanaugh, a Trump appointee, reportedly said that “we need to find a balance” between the “stigmatic harm” he acknowledged and respecting religious beliefs. One of the most powerful jurists in the country argued that religious belief might justify discrimination against loving people seeking a family.

But if you did, you cannot undo that. And even if we never meet, and even if you never admit it, you are implicated, and I hold you accountable.

More Like This
I'll Be First In Line To Vaccinate My Kids, But I'll Never Forget That We Were Last
I Found Gender Euphoria In My Second Pregnancy
How To Ask Your Partner For Support When You Need It
Stop Talking About Formula Feeding Like It’s Always A “Last Resort"