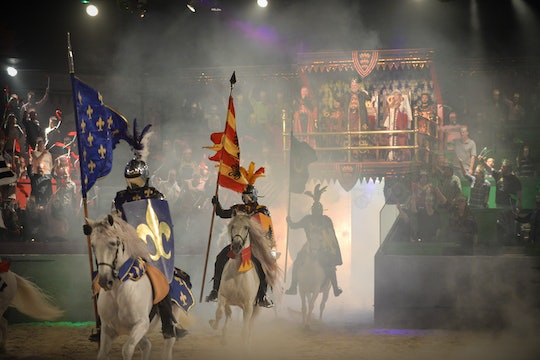 At Mom 2.0, Medieval Times Brought The Fun (Plus Yoga)

I went to Medieval Times once, when I was 7, in Orlando. The idea that you could eat while watching a live historical drama blew my mind, as did the discovery that at 7, I wasn’t the only one who wished the suburbs had moats. It was delightful but confounding: the horses and jousting were real but the competition was not. To fully appreciate what Medieval Times meant to a kid in the '80s and '90s, imagine that Chuck E. Cheese is the only immersive entertainment experience you know. So it was for us, until a Spanish dinner theater landed stateside in the early '80s and showed us what is possible in life.

There have been fewer immersive experiences for all of us in 2020, but at the first ever Mom 2.0 virtual summit, Medieval Times was on hand to remind everyone that fun does still exist, if you look for it. For the Romper team, this took the form of being greeted as “my lady” in email exchanges with Medieval Times PR representatives, which will sustain us for a long time, as well as some excellent horse training videos that would make anyone ready for a night of live 11th century battle play in Florida (and eight other locations nationwide, plus one in Canada!).

Mom 2.0 is like Davos for mom influencers, so Medieval Times, a premier sponsor of this year’s Summit, invited everyone to apply to join the Medieval Times Royal Blogger Network, which seems like a thing you can’t not do if you’re an influencer. They also let everyone know that when it is safe in your area to take your children to indoor activities — all wearing masks, obviously — there is a lot of fun to be safely had in feudal times, especially now that feudal times has a touchless payment cocktail bar and prominently displayed hand sanitizer dispensers.

Furthermore, even if you aren’t an influencer, Medieval Times would not mind if you captured the joy of your family watching its first ever queen chastise her knights (hopefully there are onramps for female knights these days) on your various social media platforms.

MT also provided a half hour of yoga to give the parents virtually attending Mom 2.0 a few minutes to breathe for the love of the queen. There was no jousting at the yoga.

Romper is an enthusiastic media partner of Mom 2.0 year-round but especially at the summit. Stay tuned Thursday evening for the Mom 2.0 Iris Awards, the Oscars of parenting influencers, which you can watch right here on Romper.