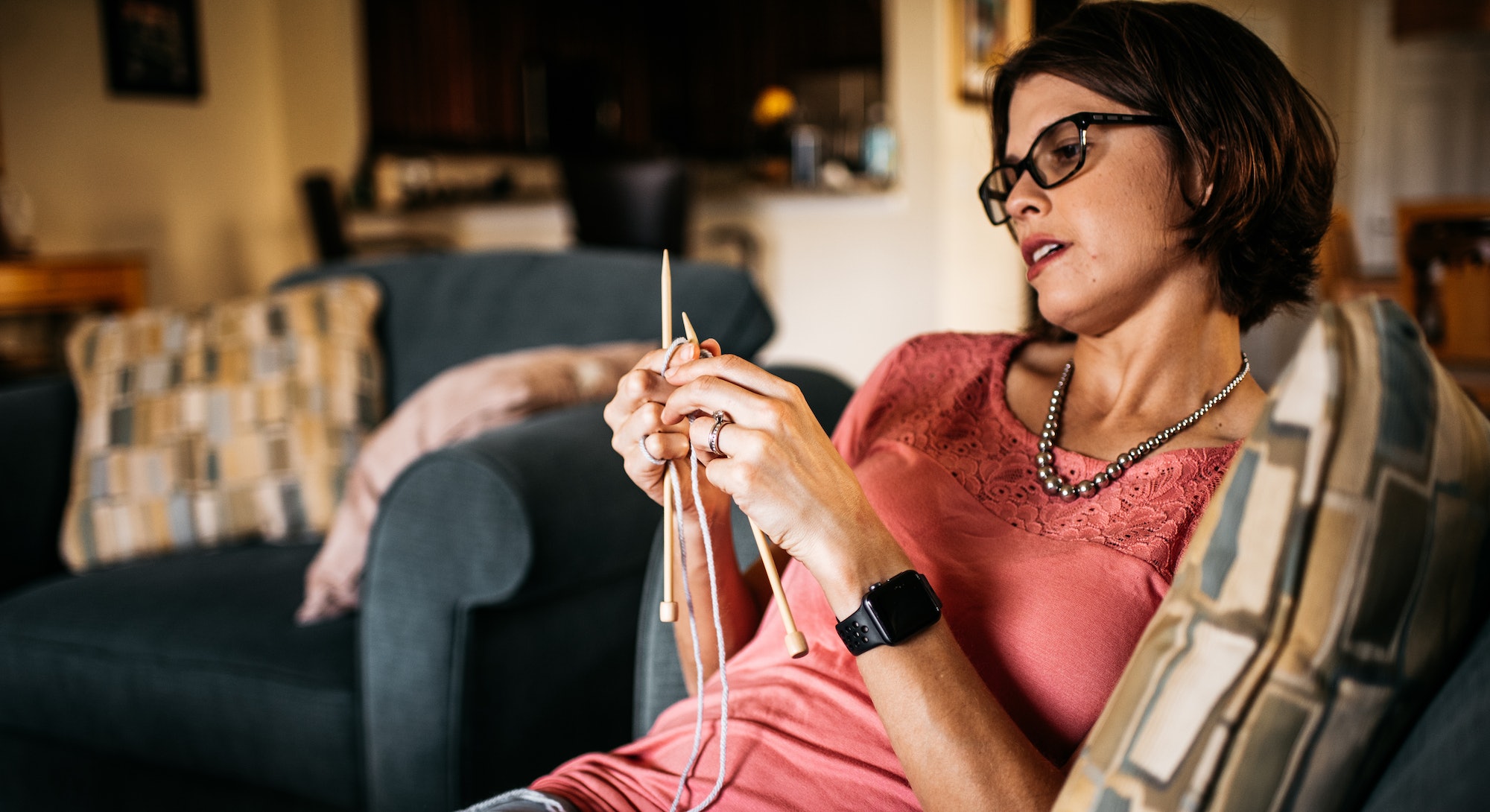 When You’re Pregnant With An Eating Disorder, You Can’t Just Stop “For The Baby”

When Jackie Noblett contacted Romper about participating in our Trying project, following five individuals for a year as they tried to conceive, we were grateful. We had been looking for a participant who was willing to chronicle her struggle with hypothalamic amenorrhea (HA), a condition wherein a woman’s exercise so far exceeds her nutritional intake that she stops ovulating and thus becomes infertile. It’s not widely known, but we had been hearing and reading more and more stories from readers shocked that when they decided to have kids, it turned out they were “too fit to get pregnant."

Noblett, an avid CrossFitter and endurance runner, had been diagnosed with HA in 2016, and she also struggled with an eating disorder that was first a reaction to and later a cause of stress in her then long-distance marriage. In 2016, when she and her husband, JP, both turned 30 and were finally living in the same place, it began to affect her personal life in another important way. They were ready to start a family, but they soon discovered that Noblett’s body wasn’t.

I was, endocrine-wise, a prepubescent girl or a post-menopausal woman.

After she had her IUD removed, her period never came back. “My blood work showed I was, endocrine-wise, a prepubescent girl or a post-menopausal woman, depending on how you look at it,” she wrote in the first of her 12 Tryers posts. Her doctor then gave her the news so many women in her shoes — athletes or fitness devotees with eating issues — dread hearing: In order to conceive naturally or even with the help of fertility drugs, she would need to dramatically curtail her exercise and increase her food intake.

HA happens when the body senses a scarcity of resources and begins shutting down non-essential processes. Reproduction is one of those. Increasing calories in and limiting calories out is the only proven way to show the body that it’s safe to restart the reproductive system, according to the Endocrine Society, an international research group devoted to the science of hormones.

When Noblett came to Romper's New York office a year ago to shoot the photos that accompany the series, her struggle was apparent. She had the physical signs of someone not taking in enough food to compensate for a pretty serious commitment to the gym, and yet she mentioned how unrealistic her doctors were being in advising her not to run more than 20 minutes a day. Her mental disconnect seemed clear, and I admit that I turned to another editor working on the project and said, “There’s no way she’s getting pregnant.”

Editors are not doctors, and we were supposed to be presenting each of these stories through an unbiased lens. But I was hospitalized three times for anorexia in my late teens and did multiple rounds of IVF. The discrepancy between what Noblett described as major efforts at altering her exercise habits and the changes her doctor had recommended sounded all too familiar, and that concerned me. I thought Noblett might be more in the thrall of her eating disorder than she realized. I thought she was setting herself up for a world of pain.

This ambivalence showed up again and again in Noblett's first six posts. She wrote over and over about being advised to conserve her energy, then slipped in that she and her husband had hiked 100 miles on vacation. To outsiders, this makes no sense. But in the world of women with HA who are trying to conceive, it makes perfect sense. Eating disorders are widely understood to be at least partially about having something you can control amid many other aspects of life that feel out of control.

Fertility treatment makes you feel out of control, which can trigger eating-disordered behavior.

And there’s another piece of HA that makes recovery even more elusive for the women who have it: how little exercise and how much weight is required to restart ovulation and menstruation are different for everyone. “A lot of people who are athletic have this tendency to think that they're special snowflakes. That they can do more or be a little different than everybody else. They just need to take a couple weeks off, or cut back a little bit, and [their period] comes back,” Noblett explains. She says she was always scanning social media for examples of people who had to make only the most minor modifications to their diet and exercise to get things up and running again.

"You look for all of those outliers that say you don't have to follow the standard prescription. You say, 'Well, if it worked for them, why won't it work for me?' In that twisted way, you want to do the absolute minimum."

She managed to gain some weight and “significantly” cut back on running, but she ultimately opted for IUI, intrauterine insemination, in which a reproductive endocrinologist uses hormonal injections to artificially stimulate ovulation, then injects sperm — the male partner's or a donor’s, depending on the patient — into the uterus. “At a certain point, you're just like, 'Alright, why don't we just try the drugs?'" she recalls. "I know it's not logical, but for somebody who has that compulsive mentality, and can't let go of things, and doesn't like to be told what to do, either, it kind of manifests itself that way."

I won't consider myself really healed until a first natural period.

The doctor ran through the risks of IUI, especially given the high dosage of stimulation drugs he was having to prescribe to get Noblett to ovulate and get her uterine lining thick enough for a fertilized egg to implant. If it worked, she could end up with not just one pregnancy but multiple. Honestly, though, she sort of tuned him out. It had been two years since she and her husband started trying. She just wanted to be done.

"It's just so mentally grueling, [you’re] like, whatever it takes. Just do it. I don't care,” she says. "You kind of get blinded to some of the other aspects.”

The first IUI failed. On January 4, 2019, following the second, she got a positive pregnancy test. A month later, an ultrasound confirmed that she was, indeed, pregnant — with triplets.

The doctor’s warning came rushing back to her. "When I thought multiples, I thought twins. Twins, OK. They're not super common in my family, but there are some ... Twins I can do."

But she is indeed having three.

For a compulsive exerciser with an eating disorder, pregnancy of any kind presents new emotional challenges. Noblett still hasn’t given up running — at 21 weeks, she's currently clocking 30 to 45 minutes, four-ish days a week. “Once again, you search for confirmation bias, and it's all these things where being active is good for pregnancy,” she says. Her doctors agreed that she could continue as long as she kept it reasonable. "Don't do anything new. Don't do anything stupid."

I think you have to really decide, how bad do you want it?

The triplets are due September 9, although triplets tend to come early, and Noblett says her doctor would be happy with a late July arrival. As of her 20-week anatomy scan a week ago, everyone on the inside was doing fine. (They look to be all girls, although Baby A has kept the technicians guessing three weeks in a row.) "I must be doing something right,” she says.

Even with her pregnancy successfully underway, Noblett isn’t under the illusion that she is cured, of hypothalamic amenorrhea or her eating disorder. Between the time of her HA diagnosis in 2016 and when she conceived in 2019, she gained only 10 pounds. She never stopped exercising, and she never resumed menstruating. "I won't consider myself really healed [from HA] until a first natural period,” she says. "I don't want to give anybody false hope.”

As for her disordered eating, she says, "It never completely goes away. It goes into this little part of your brain, into a little box, and then, every once in a while, it rears its ugly head. You know that's coming. You just have to recognize it, and hopefully, address it as quickly as possible, and take care of it before it gets worse.”

If you have an HA diagnosis and have decided to do the work of emotional and physical recovery, or undergo fertility treatment, or both, Noblett has three pieces of advice. First, be honest about your priorities. "I think you have to really decide, how bad do you want it? Maybe you want to go run one more marathon, qualify for Boston, or do one more power-life thing, or bikini contest," she says. "People want to do that, I don't judge them over it. There's plenty of female athletes that hold off their fertility because they're chasing something else. That's fine. But if you really do want to have kids, then you have to make it a priority. It's something that I learned the hard way."

There's so much support in various places from people who are going through the fertility process. It's young people. It's older people. It's rich people. It's poor people. It's white, black, gay, straight, whatever. You're not alone.

Especially since the prescription was clear — pull way back on exercise, gain weight, as much as it takes, “he didn't understand why, if he wanted children badly, and if I really wanted children, why we couldn't just fix things.”

That’s why being vocal about your thoughts and fears, about how tricky the labyrinth of a combined HA and eating disorder diagnosis can be, is so important.

"If he wants something, if he's committed, he just wants to go for it, and I think the frustrating thing has been that he couldn't fix it,” Noblett says.

In some communities, fertility treatment is still regarded as shameful. Noblett's last piece of advice is not to isolate yourself. Try to let go of that shame or connect online with the many, many others who are also getting help in order to conceive.

"There's so much support in various places from people who are going through the fertility process. It's young people. It's older people. It's rich people. It's poor people. It's white, black, gay, straight, whatever, disabled. It's regular people that you would see, [and] you'd be like, 'Oh, they're healthy. They're young.' It's there, and you're not alone.”