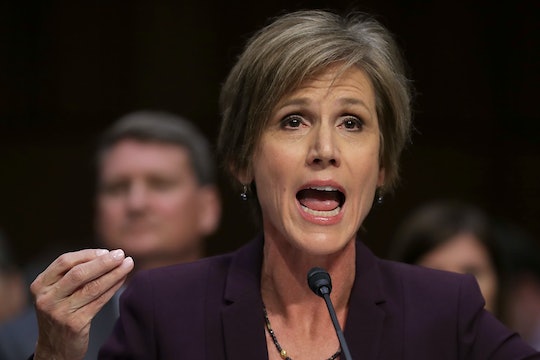 Former Attorney General Sally Yates, also known as a fearless, badass queen of epic proportions, has added a new job to her resume; writer. After serving in the Department of Justice for 27 years, she was unceremoniously fired by President Trump after she refused to support his travel ban on Muslim-majority countries. If Trump hoped he would silence Yates by firing her, he couldn't have been more wrong. She continues to stand up for what she believes in, and these quotes from Yates op-ed in The Washington Post are just another perfect example of what true integrity looks like.

Yates wrote the op-ed in response to Attorney General Jeff Sessions' call for criminal reform. Sessions announced last week that he planned to get tough on crime by forcing prosecutors to demand mandatory minimum sentencing for drug traffickers, a move which has drawn harsh criticism even within his own party. Sessions said in his mandate, according to Rolling Stone:

This is a key part of President Trump's promise to keep America safe. If you are a drug trafficker, we will not look the other way. We will not be willfully blind to your conduct.

Sessions' decision to unilaterally impose strict penalties against all drug traffickers would make it hard for prosecutors to use discretion when going to trial (as was the case under former Attorney General Eric Holder). Rather than using well-informed, intelligent reform, Sessions' plan "rolled back the clock to the 1980s," according to Yates.

Stoking Fear In Hearts Of Americans

Stoking fear by claiming that as a result of then-Attorney General Eric H. Holder Jr.’s Smart on Crime policy, the United States is gripped by a rising epidemic of violent crime that can only be cured by putting more drug offenders in jail for more time.

Sessions' assertion that being tough on crime will somehow make a difference is, as Yates noted "not supported by facts."

That argument just isn’t supported by the facts. Not only are violent crime rates still at historic lows — nearly half of what they were when I became a federal prosecutor in 1989 — but there is also no evidence that the increase in violent crime some cities have experienced is the result of drug offenders not serving enough time in prison.

When former Attorney General Holder introduced Smart on Crime in 2013, it was an effort to reform criminal justice by prioritizing the worst criminal offenders and "ensure just punishments" for low-level offenders. As Yates noted in her op-ed:

Smart on Crime focused our limited federal resources on cases that had the greatest impact on our communities — the most dangerous defendants and most complex cases. As a result, prosecutors charged more defendants with murder, assault, gun crimes and robbery than ever before. And a greater percentage of drug prosecutions targeted kingpins and drug dealers with guns.

Sessions hopes to end all of that.

A low-level drug courier, as Yates pointed out, should not be in the same boat as a cartel boss.

There’s a big difference between a cartel boss and a low-level courier. As the Sentencing Commission found, part of the problem with harsh mandatory-minimum laws passed a generation ago is that they use the weight of the drugs involved in the offense as a proxy for seriousness of the crime — to the exclusion of virtually all other considerations, including the dangerousness of the offender. Looking back, it’s clear that the mandatory-minimum laws cast too broad a net and, as a result, some low-level defendants are serving far longer sentences than are necessary — 20 years, 30 years, even mandatory life sentences, for nonviolent drug offenses.

Moving Past The Rhetoric

The Trump administration has made a career out of taglines and rhetoric. "Drain The Swamp," "Make America Great Again," etc. Yates firmly believes it's time to put aside the rhetoric and get down to the business of actually solving problems.

While there is always room to debate the most effective approach to criminal justice, that debate should be based on facts, not fear. It’s time to move past the campaign-style rhetoric of being “tough” or “soft” on crime. Justice and the safety of our communities depend on it.

Bottom line? Sally Yates has no intention of disappearing. So perhaps Sessions might want to listen to her.