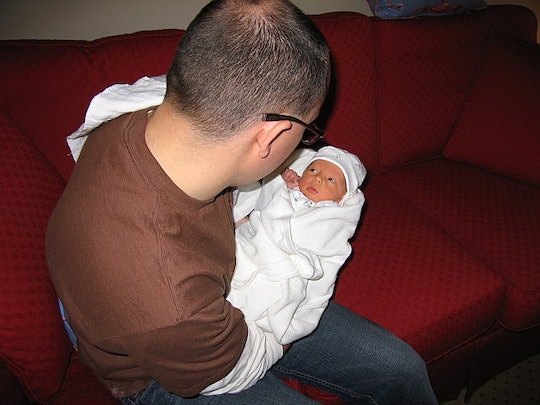 5 Reasons Paid Leave Is For Fathers, Too

Among the hot-button issues that presidential candidates are being asked to weigh in on this election cycle is the matter of paid family leave. It seems unbelievable, but the U.S. is the only industrialized nation that doesn't offer paid leave for new parents, and hey, it would be really, really nice if our next president could get on that. Part of the problem is that many people call paid leave "maternity leave," as if it's just for mothers. But that's very untrue, and treating it as such only makes it seem as though it's "unnecessary" for everyone. There are so many reasons paid family leave is for fathers, too.

Vermont Sen. Bernie Sanders co-sponsored a bill to guarantee 12 weeks of paid leave. Former Secretary of State Hillary Clinton wants rich people to foot the bill for paid leave. On the other side of the aisle, Texas Sen. Ted Cruz says that while he thinks paid leave is "wonderful," he disagrees that "the federal government should be in the business of mandating" it. Surprisingly, Florida Sen. Marco Rubio is kinda-sorta in favor of paid leave, saying that he'd offer a tax credit incentive for employers who voluntarily offer it (not good enough). When Ohio Gov. John Kasich was asked about paid leave, he mumbled something about it being bad for women, and implied that they should either work from home or quit their jobs after procreating. Professional Important Business Dude Donald Trump absolutely refuses to touch the subject with a 10-foot pole, probably because if he admitted that he was — in any way — in favor of paid leave, some enterprising reporter would ask him why he doesn't provide it for his own employees.

Paid leave is most often regarded as a women's issue, and of course, it is; women are the ones who are actually giving birth to babies, and having to go back to work the next day is a bunch of bullsh*t. And, thanks to the pay gap, straight women often make less than their male partners, so if someone has to take time off, it often makes more financial sense for the woman to do so. Then, of course, we have the deeply ingrained patriarchal notion that a mother is the primary parent, while daddy's only responsibilities are to pay the bills and occasionally toss a ball around with the kid.

But paid leave isn't just a women's issue. Newsflash, fathers are also parents, and they also need to take leave from work sometimes. Here are just a few examples: