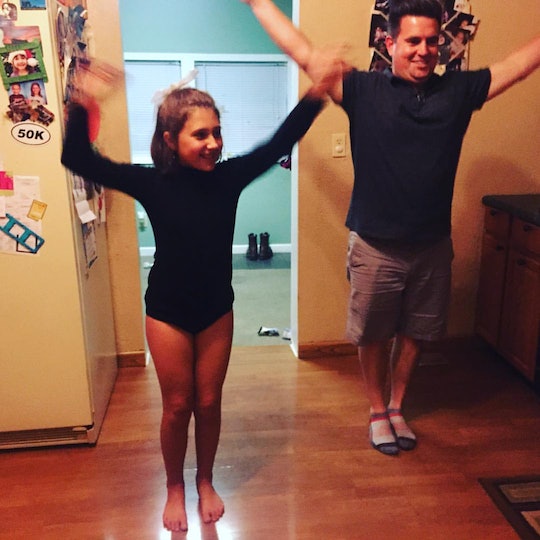 Why I Encourage Daddy-Daughter Dates

Between work and school schedules, it's usually difficult to spend one-on-one time with each of my two children. At different ages and genders, they're experiencing varying degrees of, well, different. My partner in particular struggles to connect with both children — more so our daughter. This is why I encourage daddy-daughter dates and won't apologize for it. I've seen a lot written about the cons and while I see and agree with a lot of the points made, I'm strictly referring to our situation (because every family and parental makeup is different).

Let me first be clear: I don't necessarily agree with romanticizing the time spent together because to me, "dating" your child can come off as "creepy" and may give off the opposite ideals of what we're trying to instill (independence, feminism, and equality). It comes down to my husband and daughter spending that time and regardless of whatever label is slapped on it. I'm also sensitive to the fact that not all children have a hetero house. Some have two mothers. Some have two fathers. Some only have one parent or live with other family members. No family, to me, is less than because of differing dynamics. Love is love and I get how complicated it is to narrow this father/daughter "date" idea down to the simple idea of spending quality time. Because, in general, it's not. I also wish the places that hold such events would promote such as a gender neutral evening, so no one feels left out, but in our town in particular, it's considered a "father/daughter date night," so for brevity, that's how I'll condense my argument: from my point-of-view.

My daughter was an only child for five years before her little brother came into the world to muck things up. In that time, she grew close to her father, my husband, and partner in life. She's very much his spitting image in nearly every way that contradicts me (go figure) and I can tell already how much she wants and craves his attention and acceptance because he's the one who's gone most of the time. This subject (of father daughter relationships) always hits far too close to home for me so I may be over-simplifying for the sake of coming to grips with my own experiences (although I'm trying to be objective).

Growing up, I didn't have the best relationship with my dad. He and my mom divorced when I was 7 after living through their emotionally and physically destructive marriage. When they parted and my younger brother and I had to spend time with him on the weekends, I don't remember a lot of happy. It's taken my whole life to remedy the damage suffered. Then, around the age my daughter is now, I discovered I had a biological father I'd never been allowed to know. This piece of the puzzle sent me on an infinite journey of "where do I belong?" So along with these facts, I know how important that relationship with your parents is — the opposite sex parent, if you have one, because the dynamics are sometimes different. While every situation is certainly varied (I can't say that enough), I trace my lack of confidence, worth, self-esteem, and love of self back to these two fathers. And actually, their roles impacted every relationship I've ever had, both directly and indirectly.

Having said all that, regardless of differing opinions on what a daddy-daughter "date" means to some, or how destructive it can be to diminish all the other parent does as an aside from, or how much damage these dates can cause if time is spent recreating an actual romantic date with dressing up and flowers (etc.), I want my daughter to have a bond with her father in ways I missed out on. I don't agree with or condone patriarchal superiority or teaching her to be submissive or anything of the like. I do want her to know she can do and be anything with, or without, a man — or woman — in her life. However, because my daughter does have an opposite sex parent in the house whom she wants to spend quality time with, I don't think it's a bad thing to hang out together and without me and her brother.

Here are some of the reasons I think, for us, the daddy-daughter "date" (or however you want to refer to it) is important. Though, we don't call it a "date" here. It's just "time together" just as I do the same with her, and her brother because while I like the sentiment, I'm not fond of the creep-tastic word as it does romanticize a situation that should be anything but.