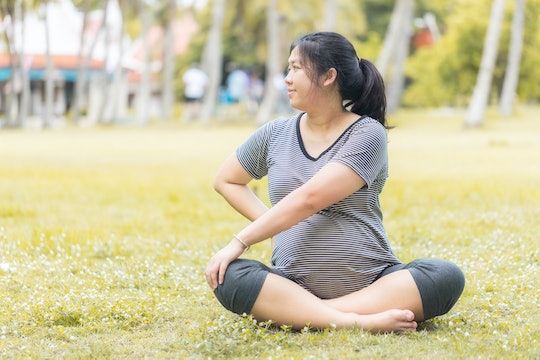 What Pregnancy Does To A Woman With Social Anxiety

Pregnancy, for me, was challenging (to say the least). I experienced every symptom in the book, was deemed high-risk for both children I carried to term, and felt miserable through the bulk of each; including the two that ended in miscarriage. In addition to the aforementioned, I also dealt with things every mom with social anxiety experiences during pregnancy and to the hundredth degree. My feet swelled to the point I couldn't be on them for more than a few seconds. I had migraines and "morning sickness" that never ended and, to my "delight," hypertension. To end my second full-term pregnancy with a bang, I lost so much amnio fluid I could feel my son's every movement. He was in danger, and though I didn't know until the umbilical cord snapped upon delivery, so was I. It's no wonder my pregnancy wasn't as glorious as I had hoped — I was miserable. It only made my anxiety, particularly of the social kind, manifest in ways I couldn't tame.

Of course, my anxiety didn't begin with pregnancy. The Anxiety and Depression Association of America states that social anxiety is, "the extreme fear of being scrutinized and judged by others in social or performance situations." It's notably something a reported 15 millions of American's struggle with and, still, most of us delay seeking treatment because we can't fathom the embarrassment and humiliation. My mind played tricks on me (still does), telling me whatever I did or said was judged by others. I convinced myself I would never live up to anyone's expectations of me, therefore failing before I ever set foot outside my house or open my mouth to speak. If you factor in pregnancy, where hormones levels are higher, the anxiety typically worsens in women like myself (and it did with each pregnancy).

I've struggled with anxiety disorders and depression my entire life, only to find pregnancy exasperated the emotions and made things feel so much worse than they (probably) were. I know some of the things I worried excessively about weren't a real danger to me but, at the time, it sure felt like it. The feelings are, and were, very valid and in no way hallucinogenic. For instance, I'd fear going out for dinner because I thought all anyone would see was my huge stomach. I couldn't deal with having all eyes on me so, as a result, I'd request we order takeout. I found ways to avoid being around people so not to make the anxiety worse. It's an endless cycle, a game I played, but never won.

Even still, over five years since the birth of my son, the social anxiety persists in ways that have manifested over time. I'm managing my symptoms now with a combination of medication and therapy, as well as natural remedies, but there are parts that will seemingly never go away. It only reminds me of how scared or stressed out I felt during those pregnancies and, for better or worse, I know I'm not alone. If you're pregnant and have social anxiety, do whatever it is you need to for the health of you and your baby. To hell with anyone else's perceptions of what they think you, a pregnant woman, should feel.