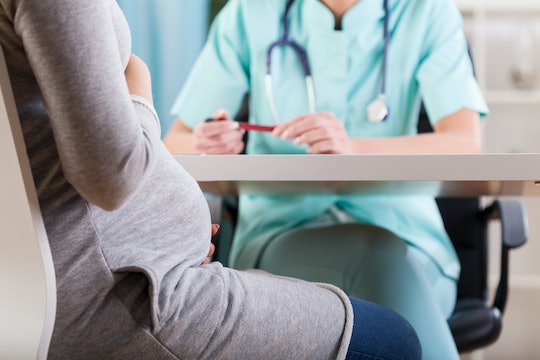 Pregnancy with my youngest didn't come easily. For years (after the birth of my oldest), my husband and I tried to conceive with no success. I suffered two miscarriages and a lot of guilt and grief along the way. By the time my body managed to cooperate, the doctors had already written off my baby-to-be. Some of the things I felt when my pregnancy was labeled as a threatened abortion, I still carry with me today. It doesn't matter that my son is now 5 and healthy as can be. I can still think back to that period of time and feel such an intense fear, remembering how I would have done anything for my son to make it through pregnancy, labor, and delivery. Anything.

For those who don't know or have never experienced it for themselves, a threatened abortion refers to vaginal bleeding during the first 20 weeks of pregnancy, which can indicate a potential miscarriage. According to the American Pregnancy Association, approximately 20 to 30 percent of pregnant women will experience vaginal bleeding in the first 20 weeks of their pregnancies. Approximately 50 percent of those women will go on to deliver healthy babies.

My first miscarriage took my partner and I by surprise, as we hadn't been trying all that long and didn't expect I'd end up pregnant when I did. The day I found out, I was elated and my husband and I celebrated. We were so grateful, I must've missed the signs that something was wrong. I remember light cramping — something I also had during my successful pregnancy with my daughter — but thought nothing of it. Pregnancy is mysterious with its symptoms, so it felt easier to write everything off as "normal."

I found out later that week I'd lost the baby. Confused and devastated, it took some time after the removal procedure to come to terms with what had happened. It didn't feel real and I felt betrayed by my own body. How could I carry life once before, only to "fail" to do it again? I tried to hold onto the hope that someday, I'd have my rainbow baby in my arms, but I was overwhelmed by the fact that pregnancy just wasn't happening.

Over a year later, I miscarried again. With the same kind of unexpected shock and confusion, my dreams of having another baby were quickly disappearing. I felt as though it wasn't going to happen, or worse, something might happen to me in the process of these losses. It was then we decided to stop "trying," and to focus on our daughter. A few weeks of "not trying" later, I miraculously became pregnant. While I didn't invest in that pregnancy at the start (due to my fear of loss), I held onto cautious hope that this would be the one to make it.

At the first doctor's appointment, before the sonogram where I'd hear my son's heart beat for the first time, the doctors labeled the pregnancy a threatened abortion. Here are some things I felt when I heard those words:

More Like This
All Your Questions About Getting Pregnant After A Tummy Tuck Answered
Ashley Graham On The “Fun, Organized Chaos” Of Raising Twins
These Stepmother's Day Instagram Captions Are Straight From The Heart
Stepmom Quotes & Sayings For Every Occasion