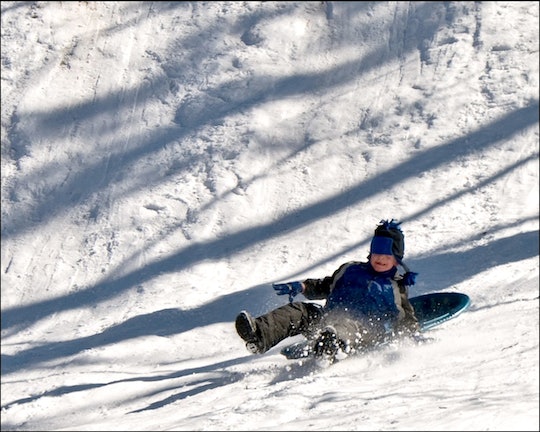 When you are growing up in a snowy climate, it is beyond fun to go sledding, build snowmen, have snowball fights, and do just about anything in a winter wonderland. But, when you're a mom of kids growing up with lots of snow, it tends to be a different story. Despite what Instagram may want you to believe with its idyllic snaps of adorably bundled babes, life only gets more complicated when the snow starts piling up. And thanks to record snowfalls in many parts of the country this year caused by a strong El Niño, many of us are learning this the hard way.

After growing up in Michigan, I know the joys of snow very well. Some of my favorite childhood memories are set in snow forts or on the playground, where the majority of my class would team up to build the biggest snowball possible. Most of the time, I still feel that same wonder when I wake up to a fresh layer of powder. My husband and I even sought out a life in Colorado so we could spend our winters on the slopes. But, now that we have a kid of our own, I’m telling my mom “thank you” more often for all the days she spent making sure I were properly clothed for the cold or scraping off the car before the sun came up to take us to school.

My kid is still a baby, so it hasn’t gotten too rough yet — but I’m already having nightmares when thinking about these things in my future:

Errands Getting Even More Complicated

This is one struggle I've already experienced. On snowy days, "simple" runs to the grocery store can feel like hard labor in the Gulag. Between bracing against cold wind with a car seat in hand and ice underfoot to scraping off the car with a crying kid inside, it can be mentally, emotionally, and physically hazardous for us to get out there.

Bundling The Kid In 15 Layers, Then Hearing "I Have To Pee"

I vividly remember being guilty of this myself, so I'm sure I'll have it coming when I spend half an hour dressing my son in long-johns, a sweater, a coat, socks, boots, gloves, a scarf, and hat only then learn he has to go to the bathroom. Pretty sure those words are going to make me wish for the days of diapers.

Having My Plans Wrecked By A Snow Day

As a kid, there was nothing — nothing — better than waking up and watching the local news until they announced your school district canceled class for the day. Snow days are a little different for parents. Because there is no true adult snow day equivalent, we're left scrambling to care for the kids at last minute's notice.

Freezing While The Kid Begs To Stay Outside Longer

If you're running up a hill to go sledding down it or building the best snowman the world has ever seen, temperature has no meaning. For the patient parents standing aside? Yeah, that hot chocolate I'm making when we go inside isn't just to warm up the kids. (Better yet, I'm making mine an "adult" version.)

Dealing With The Muck That Follows

Here in Colorado, spring is better known as "mud season." No matter what you're doing outside, it's a pain to deal with all the slush and muck that melting snow leaves behind. I'm just going to anticipate multiplying that frustration by 100 when my kid wants to get outside in it.

As bothersome as all this may be, I wouldn't trade living in a snowy climate for all the December beach days in the world. (I will take a few of those, though.) That's because if my kid's experience with snow is anything like mine were, it's going to be worth it to watch the fun he has.