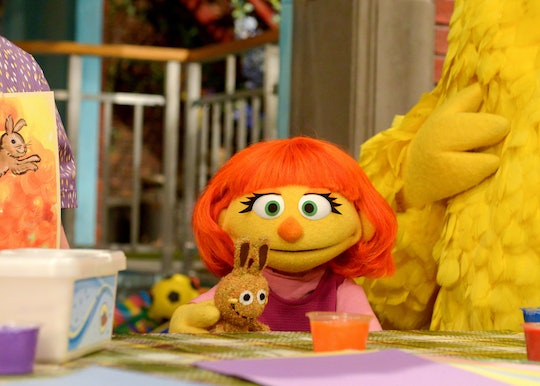 As the mother of an autistic child, I'm sensitive to the lack of representation of autistic stories in the media. So, when I first heard Sesame Street was going to have a character with Autism Spectrum Disorder (ASD) named Julia, I was ecstatic. Then again, I was also hesitant, as I remembered another common problem in entertainment: stereotypical representation of autistic people. Thankfully, there are more than a few things Sesame Street gets right about autistic children.

My partner and my 7-year-old daughter Lily are autistic. I, and my 5-year-old son, are allistic (non-autistic). For this reason, watching Julia's big Sesame Street debut was essential to do as a family. And I'm happy to report that, for the most part, our consensus is positive.

In true unique-to-him form, my partner's takeaway was that he didn't necessarily find anything "wrong" with Julia, only that he would've done it much differently. Lily's primary concern, however, was the letter of the day. She believed it should have been "J" for Julia. She didn't think Julia was in the episode frequently enough. She was also very upset by the fact that Julia's hair changed from orange (online) to red (on TV) without any explanation. Some autistic people like my daughter notice small details and expect inconsistencies like this to be clearly explained. My 5 year old, Padd, on the other hand, was ecstatic that Julia was autistic just like his sister. "She puts her hands over her ears, like Lily!" Finally, my 11 month old, who has never bothered with TV before, sat on my lap mesmerized, dancing, clapping, and laughing through the entire episode.

I spent some time digesting the episode, the autistic character of Julia, and the supplemental material about autism that Sesame Street encourages viewers to check out. It's certainly exciting to hear that Stacey Gordon, the puppeteer behind Julia, has an autistic son, too.

All in all, there are some important things that Sesame Street got right about autistic kids.

One thing representations of autistic people often get wrong is they assume autism is synonymous with an empathy disorder. This can make parents of children without autism nervous about autistic kids in the classroom. While it's certainly possible for ASD to co-occur with other disorders, a lack of empathy is far from what autistic people tell us about their experience. In fact, some autistic bloggers have written extensively about the uniquely autistic experience of being over-empathic.

It was refreshing to see Julia caring about her fellow muppets, actively engaging in play, and being socially motivated. This is a wonderful way for the people who may not be familiar with autism to see how Julia's ways of playing might look different, but that doesn't mean she cares less.

Even when the storyline didn't draw attention to it, I noticed that Alan Muraoka went out of his way not to touch Julia when she was overstimulated. He modeled this by not touching Julia when leading her away to take a sensory break, which is a break some autistic people take to calm their overstimulated nervous system.

While some allistics may find touch grounding when they're overwhelmed, autistic kids are far more likely to find touch triggering or even painful when in a heightened state of awareness. It is so important for non-autistic kids to learn this so they can support their autistic friends appropriately.

Julia stimmed! Stimming is a self-stimulating behavior that some autistic people have and it looks different depending on the person. Julia flaps her hands, some people rock, others might rub their fingers together. This deserves an exclamation because stimming is one of the behaviors that makes allistic people misunderstand and fear autistic people. Seeing Julia stim helps to normalize these behaviors for children and parents not familiar with ASD.

Stimming has historically been misunderstood and stigmatized by the non-autistic community. Some therapies to "treat" ASD even attempt to stop stimming behaviors, which can have harmful effects on autistic people. But seeing a lovable muppet stimming by flapping her hands when excited warmed my heart because it's a natural piece of an autistic person's self.

We all self-regulate emotionally and physically. Most non-autistics do it without even knowing we're doing it. Scratching, humming, biting lips, peeing, etc. are all ways people self-regulate. It's a way to maintain body, self, mind, and nervous system balance. A lot of allistics self-regulate internally, as do most autistic people in some ways. The stimming behaviors are exactly the same thing. Stimming is emotional and physical regulation and, unless self-harming, is nothing to be afraid of.

One of the primary symptom clusters of ASD is sensory processing disorder. There were several times throughout the episode when Julia experienced a sensory challenge. Examples of this include when she put her hands over her ears when a siren rang out, and when she recoiled at the idea of finger painting. Though rarely as obvious to outsiders in real life, these were great examples of things allistics don't give a second thought to, but that might be greatly distressing to autistic people.

The episode showed Julia assert her needs and resource herself by either leaving the situation or expressing her discomfort with a verbal cue. Notably, we also saw Julia's friends support her choice to take a break when she was overwhelmed or make adjustments to activities she didn't feel comfortable doing.

I was excited to see the episode include social stories, which are one of the top tools parents and educators use for teaching autistic children. Occupational therapists sometimes use social stories to teach autistic kids new skills. These particular scenes seemed tailor made for autistic kids, which is rare, and very appreciated.

There were two notable segments illustrating this teaching method in the episode. The first was the two-headed monster learning to share, and the second was the adorable vignette about friends.

Julia seems like a lovely muppet girl I'd like to get to know better and she represents her community well. However, Sesame Street does fall prey to one of the primary criticisms of the autism awareness movement. That is that non-autistic people are speaking for autistic people rather than letting autistic people speak for themselves. Changing the status quo is just as important as promoting awareness and acceptance. These two goals are not mutually exclusive, but in fact complementary.

I also noticed that all the group shots, Julia is noticeably absent. My daughter immediately commented on this. "Where's Julia? Doesn't she get to play because she's autistic?" While I do understand the production choice not to have new characters in the group sing and dance numbers, it would've meant a lot for my daughter to see Julia in those scenes.

The reason for that is simple: Autistic kids are often excluded from fun activities in their own daily lives. Sometimes they're excluded because other kids think they're "weird" and don't want to play with them. That's not to say that this was Sesame Street's intention by any means, but I think it's important to highlight that kids — both autistic and allistic — need real-life examples depicting inclusive play, no matter someone's abilities. Representation matters. It matters because it tells my daughter, and children like her, that they're worthy and that they belong.

Lily also noticed that Julia didn't display the same types of behaviors she does. "I'm also autistic," Lily said, "but Julia doesn't do things the way I do things. I don't bounce around. I don't wave my arms like crazy. I don't do any of that stuff. But I do paint with paintbrushes." Lily is three years older than Julia, so some of their differences are developmental. However, this afforded us a wonderful opportunity to discuss how autism shows up differently for different people.

Mainstream culture has what our household calls "The Rain Man Phenomenon." This is when all autistic people are painted with a stereotypical brush. My hope is that Julia's presence on Sesame Street will allow for a broader, community-wide conversation about the different ways ASD can occur in people so the wide range of neurodiversity can be accepted and appreciated. And in the future, I hope to see episodes where Julia speaks directly to other autistic kids, whether on the show or to the watching audience.

I give kudos to Sesame Street for doing something long overdue. I was happy to watch it and can't wait to see it evolve. The show's inclusion of Julia helps to further the conversation about autistic people, and it's my hope that by embracing all Julia is, Sesame Street will also create a platform to expand the conversation.