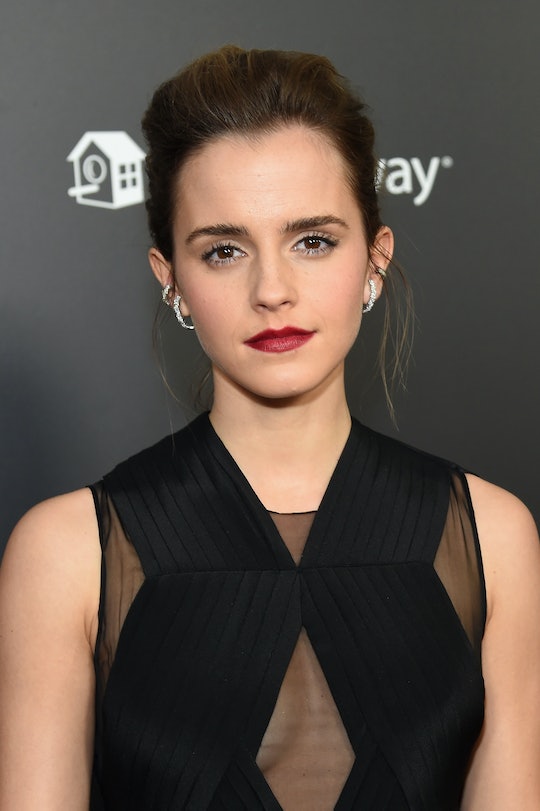 Emma Watson, the breakout star of feminism and also movies like Beauty and the Beast, has a birthday today. I haven't had a chance to get any shopping done, but I do feel like I need to get her something. Because I love her to pieces. So I decided to celebrate badass feminist Emma Watson on her birthday with examples of the many times she owned being a 21st century, evolved woman. The future is female, indeed.

It seems almost impossible to believe, but Hermione (er, Emma Watson) turned 27 years old on Saturday. Watson has been delighting us on the big screen since she was just a little girl with bushy hair, a witches' cloak, and a clever wit as Hermione Granger in the Harry Potter series. While Watson has honed her acting chops and developed into a really fine actress, it's her bold, forthright stance on feminism that is true cause for celebration in my humble opinion. Time and time again, the young star from Britain has stepped up to the plate in defense of modern feminism, which she once famously said as the UN Goodwill Ambassador in a 2014 interview with Elle UK:

Feminism is not here to dictate to you. It’s not prescriptive, it’s not dogmatic. All we are here to do is give you a choice. If you want to run for President, you can. If you don’t, that’s wonderful, too.

And now, some other times Watson exemplified the definition of modern feminism.

Watson gave a rousing, passionate, and frankly pitch-perfect speech at the United Nation in Sept. 2014 to promote HeforShe, a global mission to encourage gender equality. In her speech, Watson said:

In an interview with Esquire U.K., Watson gave a convincing argument about the importance of feminism for men as well as women.

[Feminism]’s not about us convincing you that gender equality is worth engaging in only because there might be something in it for you, or in it for your sister or your mother. The question is, what’s in it for humans? Happier, healthier, more successful children? Being able to take proper paternity leave and see your baby? Being able to talk to someone if you’re feeling shit? Actually getting to be yourself? Getting asked out by a woman? Better sex? A marriage that is a true partnership? More diverse and interesting perspectives in art, culture, business and politics? Getting to crowdsource all the innovation and genius in the world, not just half of it? A highly increased number of safe, confident and fulfilled people on the planet, particularly women? World peace? Seriously. World peace!

In an effort to get more people to read about female empowerment, Watson hid copies of Maya Angelou's Mom & Me & Mom around the London Underground and the New York subway system earlier this year. She posted the "treasure hunt" to her social media accounts... and probably created a few more feminists in the meantime.

At the 2016 global youth forum One Young World, Watson announced she would be offering substantial scholarships to nine women who worked towards social justice. Because Watson clearly understands that speaking out makes a difference, but acting out changes the world.

Watson posed for the cover of Vanity Fair while promoting Beauty and the Beast in a sheer top that exposed her breast. Naturally, news outlets lost their minds. Pret-a-Reporter even referred to her as a "hypocrite." And what did Watson have to say about it? In an interview with Reuters, Watson admonished critics who "were saying that I couldn’t be a feminist and have boobs."

Then, as ever, she lowered the boom.

Feminism is about giving women choice. Feminism is not a stick with which to beat other women with. It’s about freedom. It’s about liberation. It’s about equality. I really don’t know what my tits have to do with it.

I have nothing to add to that perfect sentiment.