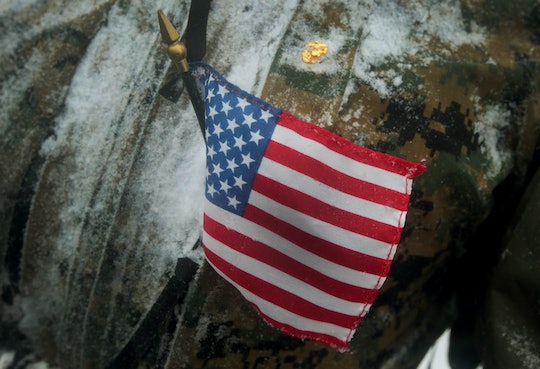 5 Ways You Can Still Help Standing Rock, Because The Fight Isn't Over Yet

They were the "water protectors": thousands of men and women banding together for peaceful protests, to protect the Standing Rock Sioux tribe's right to clean water and their sacred lands. To some, it seemed like a protest that would never work — a small tribe against a big oil company determined to drill a pipeline under their river. And yet, progress has been made. Protesters have been asked to head home for the winter. Change happened. But that doesn't mean there aren't still ways to help the people of Standing Rock. Because while a battle may have been won, don't assume the war is over.

A company called Energy Transfer Partners has been fighting to complete its $3.8 billion, 1,172 mile Dakota Access Pipeline, with a section planned to run directly under the Missouri River, just outside the reservation. The Army Corps of Engineers denied a permit to the Texas-based company on Sunday, citing tribal concerns. According to NPR, Jo-Ellen Darcy, the army's assistant secretary for civil works, spoke with tribal officials about the possible damage the pipeline could cause for their drinking water. Darcy found that there was "clearly more work to do" and released a statement saying:

The best way to complete that work responsibly and expeditiously is to explore alternate routes for the pipeline crossing. The Army Corps says it intends to issue an Environmental Impact Statement with "full public input and analysis."

What does this decision mean for the future of the Dakota pipeline? It is a victory for the Sioux people and the thousands of water-protectors who stood by them, most certainly, but it could be a short-lived victory. Unfortunately, the pipeline hasn't been cancelled, merely relocated. In fact, Energy Transfer Partners released a statement on Monday affirming it would continue to “complete construction of the pipeline without any additional rerouting."

So how can you help the people of Standing Rock in the meantime?

It's easy enough to move on to the newest news of the day — to keep up the forward momentum... to forget. Especially as the holidays descend and with it, snow and cold and distraction. But staying present is, quite honestly, the best way to help the people of Standing Rock. Refusing to be moved along to the next interesting bit of news. Refusing to ignore or forget or get bored. Stay vigilant.

The cold winter is descending on North Dakota, and for any activists, veterans, and protesters still standing guard in their encampments along the Missouri River, things are about to get challenging. They will need food, blankets, winter clothes, wood. All manner of provisions to get them through the winter.

Standing Rock Sioux tribe chairman Dave Archambault released a video thanking protesters... and asking them to go on home. The pipeline will be rerouted, and their "purpose has been served."

We came to fight a black snake. Until it’s dead, we stand. That doesn’t mean put it five miles up the river. That means kill it dead.

According to The Guardian, some water-protectors were not immediately overjoyed by the news of the permit denial. Some thought it could potentially be a device to remove protesters so the pipeline could continue as planned.

Keep your eyes on the pipeline.

North Dakota Governor Jack Dalrymple authorized "a mandatory evacuation of all persons located in areas under the proprietary jurisdiction of the United States Army Corps of Engineers located in Morton County," in November. He was reportedly concerned about the weather. You can call his office at 701-328-2200 to leave a respectful message about the Dakota Access Pipeline, to remind the governor's office that the fight is not yet over, so long as the company behind it is promising to push forward.

One thing we've learned from the Standing Rock protests is that peaceful, organized protests can enact change. So too can adding a single voice. Sign the petition to stop the Dakota Access Pipeline. Make your voice heard.

The battle may be won, but the larger war looming in the background still stands — keep focused and lend a hand wherever you can until Standing Rock is truly and fully protected for good.