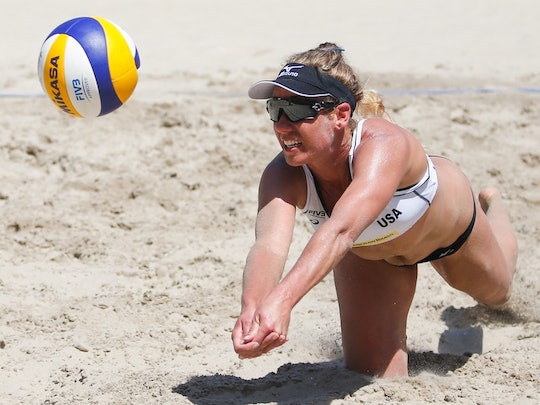 Given its birth on the beaches of Waikiki and mass popularity, professional beach volleyball seems accessible, friendly, and — dare I say it? — laid-back. Though it's been a huge part of the Olympic Games since 1996, the sport continues to feel like a defiant new kid on the block. But don't let the beach setting fool you: this is a sport that requires hard-hitting athleticism, mental toughness, and major teamwork. It attracts some of the world's fiercest competitors, and Rio will be the perfect opportunity for Team USA to shine. Is there any other sport that America deserves to dominate more? Enter April Ross, a beach volleyball phenom who is back for her second Olympic Games after winning silver in London 2012.

To learn a little bit more about April Ross (both on and off the sand), we've teamed up with Smucker's® Uncrustables®, a proud sponsor of Team USA. Here's what we know about the California native.

1. She's Always Been An Athlete

Though she's clearly kicked around a soccer ball or two, she dominated in volleyball, track, and basketball in high school. She went on to become one of the most decorated volleyball players in USC's history, leading the team in kills, kills per game, and points throughout all four seasons, starting every single match and gathering national recognition along the way.

"To read other people's minds," she told Smucker's® Uncrustables®. "For the sole purpose of being able to tell exactly what the other team is going to do on the court!"

Combined with her demonstrated ability to fly, she'd be well on her way to superhero status.

3. Her Favorite Emoji Is:

Aka, the "Face With Stuck-Out Tongue And Winking Eye," for when her joy is too much to convey with words.

4. Her Good-Luck Charm Is A Gift From Her Mother

"I only brought it out for the last Olympics, and I'll bring it out at this Olympics," she said. "It's a heart necklace my mom gave me in high school."

To wind down on a day off, Ross can't do without a cup coffee and a good book. She also uses meditation to deal with the pressure of high-stakes competition.

"I think meditation is huge," she told ESPNW. "Just stop for a second and recognize thoughts and fears and learn to be OK with all that. Realize the things you're stressing about, and not judge yourself for it. Let them go."

Ross and her teammate are seeded third — after two teams from Brazil. Although Copacabana Beach is a long way from California, Ross says she feels right at home.

“I love the conditions, I love the atmosphere, I love the location,” she told USA Today. “It’s definitely Brazilian, but it has a little bit of a southern California vibe.”

This post is sponsored by Smucker's® Uncrustables® Sandwiches, proud sponsor of Team USA.