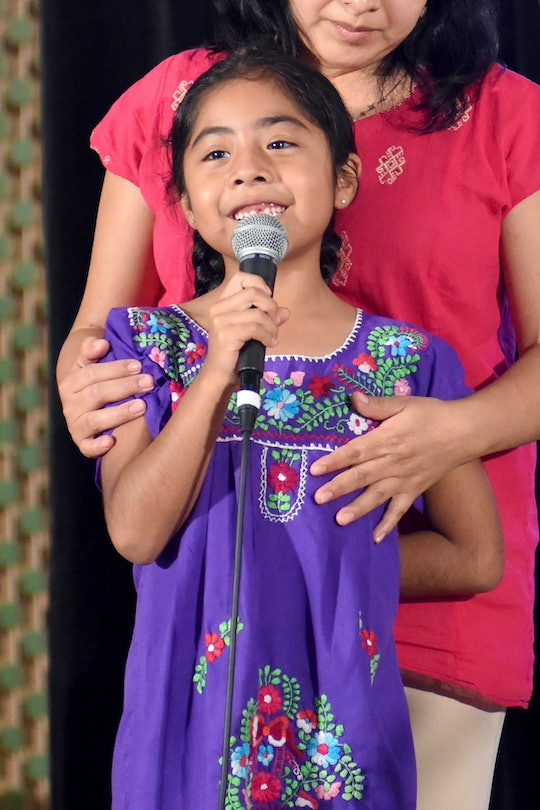 Girls are going to save the world, there's no doubt about it. In recent years, a handful of young women have proven that fact and inspired the rest of the world to reach a little farther. And, most important, to not ever underestimate the power of even just one voice. In honor of International Day of the Girl today, let's celebrate several girl activists who are changing the world one step at a time.

This includes Greta Thunberg, the 16-year-old Swedish climate activist who's made headlines for her impassioned speeches to government officials, pleading them to take environmental reform seriously. Another young woman on the list is Amariyanna Copeny, or "Little Miss Flint," the 12-year-old who singlehandedly got President Barack Obama to sign off on $100 million in aide to Flint, Michigan, while herself raising funds for 1 million water bottles sent to the area, and $250,000 in aide. Young girls are taking charge of the future, and we should all be paying attention.

In honor of International Day of the Girl this Friday, Oct. 11, let's honor these young women making headlines and becoming household names, as their journeys to create serious waves of change in their respective fields (climate, literacy, health, gun safety reform, etc.) continue to ripple through their communities, and out to the nation and world at large. While there are certainly several inspiring young women fighting the good fight, here are six incredible young girls you should keep on your radar.

Greta Thunberg, a 16-year-old from Sweden, has become an icon in the fight for climate change. Thunberg began the "Fridays for the Future" movement in 2018, according to the BBC, which encouraged children to skip school in protest of climate reform. It won her a nod for a Nobel Peace Prize, which shortly followed her impassioned speech to the UN, which went viral.

"This is all wrong. I shouldn't be standing here. I should be back in school on the other side of the ocean," she said in September. "Yet you all come to me for hope? How dare you! You have stolen my dreams and my childhood with your empty words."

Mari Copeny, also known as "Little Miss Flint," is committed to seeing big change in her hometown of Flint, where water is still not 100% clean.

Copeny's advocacy encouraged President Obama to approve $100 million in aide to Flint back in 2016, according to The Hill. For her part, Copeny also collected over 1 million water bottles, backpacks for students, and $250,000 in aide for her community.

Marley Dias, a lifelong book lover, was tired of all the books in her school library being about "white boys and their dogs," Forbes reported. So, in November 2015, she launched #1000BlackGirlBooks to collect and donate 1,000 books that feature black girls as the protagonist. Today, Dias has donated thousands of such titles, and even scored a book deal of her own, NBC News reported in 2017. Last year, Marley Dias Gets It Done: And So Can You! was released with an introduction by Ava DuVernay. The book is available for just $3.75 on Amazon, ensuring it is accessible to all.

Payal Jangid, a 17-year-old who advocated her way out of her own arranged marriage, has devoted her life and time to ensuring the same for other young women in India, according to People. She now also advocates for the end of child labor, and received a Changemaker award for her work, The Week reported.

“I was proud when I found out that so many people had voted for me,” Jangid told World Children's Prize. “I want to fight for all children, especially girls. Here in Rajasthan, lots of girls are forced to work hard and get married when they are only twelve. I don’t like child marriage. We visit children at home and explain to their parents why school is important. I want to be a teacher. We also tell fathers not to hit their children or wives. If they are loving instead, things are better for everyone.”

Sophie Cruz, the daughter of Oaxacan parents, advocates for immigration reform. She came to notoriety back in 2015, when at just 5 years old, she handed the Pope a letter asking for help to protect her parents.

“I have a right to live with my parents. I have a right to be happy. My dad works very hard in a factory galvanizing metals. Immigrants like my dad feed this country," her letter read, according to WeAreMitu. "They therefore deserve to live with dignity, they deserve to be respected, they deserve immigration reform, because it would be beneficial to my country, and because they have earned it working very hard, picking oranges, onions, watermelons, spinach, lettuce, and many other vegetables.”

A survivor of the Marjory Stoneman Douglas High School mass shooting in Parkland, Florida, Emma Gonzalez is advocates for gun safety reform. She was one of the students who founded the March For Our Lives, which began over 800 protests nationwide, The New York Times reported.

“Everybody in this room is in a unique position because you are here, you have proven to hold power,” Gonzalez said at Variety's Power of Women event. “To each of you powerful women I say this, you know that you are forces to be reckoned with, you can and have inspired peace and understanding and most importantly right now you can inspire your audience to vote. Now more than ever women need to continue to rise up.”

For each of these young women, while their causes are diverse, their intentions are similar: they are here to make change on a global scale, and they are beginning with what they have: a voice, a purpose, and a plan. Keep your eyes out for these young innovators, because their advocacy today will undoubtedly turn into a movement as the years go on.