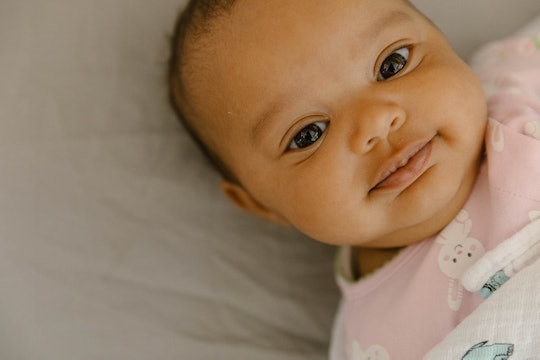 Changing bed sheets is one of those things that I intend to do at least weekly, but often forgo in favor of what I believe to be more important to-do list items, like showering, eating a meal while it's still hot, and sleeping. But after learning all of the gross things that happen if you don't change your baby's sheets often, I am starting to think I need to re-order my priorities. Turns out, my friends, that unwashed crib sheets are gross. Like, seriously gross.

As HuffPost reports, and according to Mary Malone, a laundry expert, unwashed bed sheets can contain things like sweat, bacteria, urine, and feces. According to the American Academy of Pediatrics (AAP), your baby's sheets also likely contain a large quantity of dust mites — a microscopic relative of spiders — that love to lurk in unwashed bedding and can exacerbate allergies and asthma in your little one. Good Housekeeping recommends changing your sheets at least every other week. However, you may want to change them more often than that for some very good reasons. According to the Centers for Disease Control and Prevention (CDC), bacteria like staph can contaminate bed sheets, and NBC News reports that viruses like norovirus can live on bed sheets for weeks.

For more about these and other gross things that are probably lurking in your baby's room right now, read on. Even if they aren't. though, you should probably change their crib sheets, like, right now. You know, just in case.