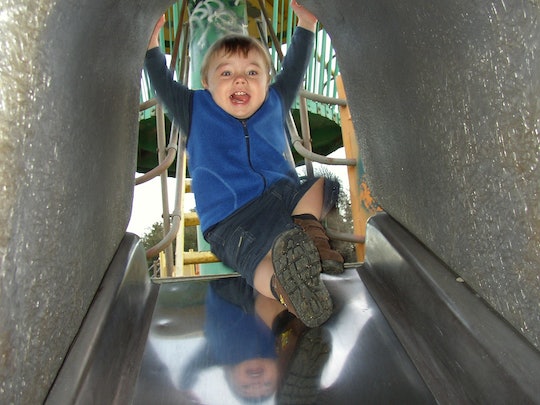 6 Important Quotes From "How To Raise A Feminist Son"

I often worry about who my son will become. I worry if he will be nice or if something will happen to diminish the light he shines so bright. I worry if he will be a genuinely good human being or turn out to be a troll. I worry whether he'll treat others with respect or become a bully. I worry about these things because, despite my parenting, there's always a chance he'll go in the opposite direction. But these six important quotes from “How to Raise a Feminist Son” in the New York Times have shown me that I am on the right track.

When I learned I was pregnant with a boy, a frenzy of thoughts rushed through my head. How will I teach him consent at a young age? How will I shut down the "boys will be boys" narrative so he doesn't turn out to be a sexist pig? How will I make him understand his privilege as a white male? How do I stop him from falling down that anti-woman, anti-LGBTQ, racist black hole?

To some people, it seems ridiculous to be concerned with these issues at this point in his life. But kids are impressionable. How they view the world and their place in it begins when they are young. That's why the advice given in "How to Raise a Feminist Son" is so important.

My partner and I can't help but fit into certain roles. He goes to work outside of the home and I am here watching my son while I work. But that's because of the nature of our jobs. Still, I want to make sure my son understands that his parents have an equal partnership, because, as Dan Clawson, a sociologist at the University of Massachusetts, Amherst, put it:

If the mother cooks the food and cleans the house and the father mows the lawn and is often gone from home, lessons are learned.

Breaking gender norms is crucial to a kid's development; according to Richard Fabes, director of Arizona State University's Sanford School, children who play with friends of the opposite gender are better problem solvers and communicators. Otherwise,

I tried to be very conscious about consent and the ways in which I may not always practice what I preach. Did my son see me grab the remote from my partner? Did I continue to kiss my son's cheeks when he was trying to pull away? So I try to check myself whenever I can so that he doesn't repeat these patterns. Another way to teach respect and consent:

Require children to ask before they touch one another’s bodies as early as preschool. Also, teach them the power of the word no — stop tickling them or wrestling with them when they say it.

And Forget "Boys Will Be Boys"

I seriously hate the "boys will be boys" narrative. "Boys will be boys" is what allows rape culture to perpetuate, and I will have none of it. If my son is being inappropriate, I will check him. Tim King, founder of Urban Prep Academies, said,

Be vigilant in redirecting conduct which is demeaning, intolerant, disrespectful, offensive.

That includes using sexist language to demean people (something I can honestly say I still need to work on).

This Is A Judgement-Free Zone

My son's name is Kelly, a traditional male Irish name. But that hasn't stopped people from calling him a girl or mistaking him for a girl.

Having his gender misidentified isn't the issue for me — it's that people are so focused on which names should belong to which gender that they can't wrap their heads around a boy named Kelly. I want to teach my son to be as open-minded as possible, whether it's about names or what someone plays with. As Emily Kane, a sociologist at Bates College, said,

We can all help by avoiding judgment, and avoiding small, everyday assumptions about what a kid will enjoy or be good at based on their gender.

And if he does get teased, I will teach him to check his bullies on their sexism and racism — even if he is just 5 years old.

Be You, Do You

This particular paragraph is the one that summarized the essay the best, and needs no commentary:

Teach boys to show strength — the strength to acknowledge their emotions. Teach them to provide for their families — by caring for them. Show them how to be tough — tough enough to stand up to intolerance. Give them confidence — to pursue whatever they’re passionate about.

"How To Raise A Feminist Son" has received a lot of backlash on Twitter, mainly from trolls who see the New York Times essay as "diminishing men." And, as expected, the tweets trashing the piece are riddled with homophobia, sexism, anti-feminism, and misogyny.

But these quotes from "How to Raise a Feminist Son" show parents can teach their kids to disavow the toxic masculinity that is so harmful to girls and boys, women and men.