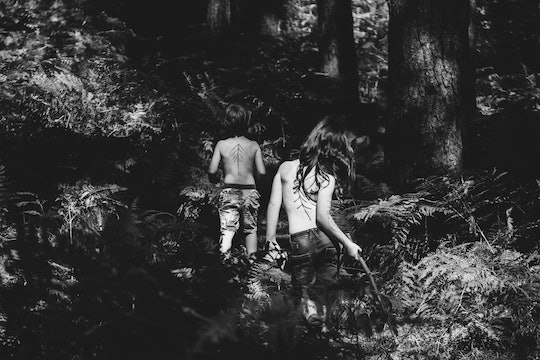 How To Explain Sexism To Your Kids: An Age-By-Age Guide

My 4-year-old did not understand Mulan. At all. It's not that he's not bright or wasn't paying attention. It's that he was boggled by the basic premise (not the cross-dressing, though). He was perplexed by the idea that Mulan was devalued and excluded from certain activities because she was a woman. On the one hand, that filled me with smug, liberal, feminist pride. It sounds like the kind of thing a caricature of a one-upping yuppie mom would say in a comedy sketch: "Well, my little William is soooooooooo committed to gender-equality he didn't even understand the plot of the movie Mulan," she would say, sipping coffee around a fancy kitchen table with a cadre of other moms, whose seething hatred you could see through the big smiles. Still, it's kind of a nice feeling to know that your kid has been shielded from enough misogynistic garbage that this kind of sexism eludes his comprehension.

On the other hand, it was distressing. Because I know that one day, probably one day very soon, that's not going to be true. He will know all about sexist societal expectations, stereotypes, and pressures, and that it's up to me and his father to contextualize it and give him the tools to fight it out in the world and within himself. Same goes for his not-yet-2-year-old sister.

Watching Mulan (which, by the bye, is crazy problematic in my humble opinion, and I'm not alone in that assessment) inspired me to think about how I was going to broach and navigate the discussion of sexism as soon as possible with my children. I came up with this plan.