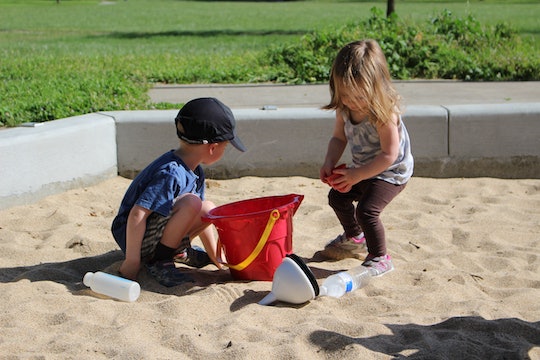 The One Reason Why I'm Raising My Kids To Be Feminists

When I was pregnant with my first child, I wished for a son. I knew no matter what I would raise my children to be feminists, but I couldn’t wrap my mind around the emotional web of raising a daughter. I still didn’t know how to navigate my complicated feelings toward my own girlhood and the gnawing insecurities that still reared their ugly heads every now and again. I worried, with a daughter, that I wouldn’t have the right words to heal the wounds from the careless words of others. I didn’t want to worry for her safety every time she got into a car with a boy. I didn’t want teen magazines to make her feel like she wasn’t enough in her own splendid uniqueness. I would worry about things too awful to speak out loud. Raising a son seemed easier, less riddled with heartache.

My husband and I went to the anatomy ultrasound after weeks of agonizing over things I could not control. I breathed a sigh of relief before the ultrasound technician even said it out loud. It was clear as day. It was a boy. But two years later and pregnant yet again, it was a girl. A daughter. It was exactly what I had hoped for this time around, until those thoughts flooded my mind yet again.

All the fears of raising my daughter in a patriarchal society are ones I already knew all too well. I remembered being catcalled as young as teen. I remembered, in college, how I would walk to my car at night with my hand wrapped tightly around the pepper spray in my coat pocket. I remember how discouraged I was when I realized that my dream of becoming an author came with the deck stacked heavily against me. I knew firsthand all the small, intricate ways the world would be slightly more difficult and that she would need to be strong enough to overcome those obstacles. I would need to teach her how.

Mothering a daughter felt like a tall and daunting order to fill. But it also presented me with a unique opportunity: to raise my son and my daughter on equal footing. To teach them more of their similarities than their differences. To raise them to be feminists, firm in the fight for each other and equality.

To be honest, I never even considered the possibility of raising my kids in a world where they would feel unequal. I didn’t look forward to the day when someone would strike up a conversation about my son’s interests and hobbies then turn to my daughter to tell her she’s pretty. I wanted them to have an unshakeable understanding that they are both deserving of respect and genuine interest and success based on their merits.

Raising feminists also means that they don’t have to push outside of the gender norms. If they fit inside the sort of box that society likes, that is wonderful, so long as it makes them happy. And if they want to buck against the norms, I will be right there beside them. I want to raise them as feminists so they have the opportunity to live in a way that feels right for them. If my daughter decides she wants to stay home and raise a family, that’s perfectly fine. If my son decides that being a lumberjack and growing a mighty fine beard isn't right for him, more power to him. They should follow their passions no matter which direction they lead.

I want them to understand the true meaning of feminism and not the convoluted misinterpretation so many have. When I was growing up I thought feminism was inherently angry and raged against anyone who fit into traditional roles. I thought I wasn't a feminist because of interests like baking and dancing and boys. I want my kids to know that as long as they love and respect women as equal human beings, that they are feminists.

I want my son to know that feminism is for him, not against him. It'll give him an equal playing field with his peers. It'll grant him freedom from dated ideals of masculinity, and allow him to be a more whole and authentic person. I want my daughter to know that feminism honors her femininity and all of her traits by giving her the choice to be whomever she chooses to be. It will help encourage her to rise up with other women, not to be in competition with them. (And if she wants to compete, I want her to remember that she's against everyone, not just people who check the "female" box.)

At this stage, it's still simple. We are laying the groundwork of equality for our children. If my son wants to paint his nails when his sister does, we let him. When my daughter wants to play superheroes with the boys, we let her. When they ask if a toy is for girls or for boys, we tell them it is for anyone who wants to play with it. Equal is simple. It makes sense to them.

I believe feminism will help guide them as they grow, teaching them to fight for what is just and speak out against what is wrong. It will help them choose wisely in friends and partners. It will teach them what is worth fighting for. Of course I want to raise feminists. I wouldn’t want them to grow up any other way.