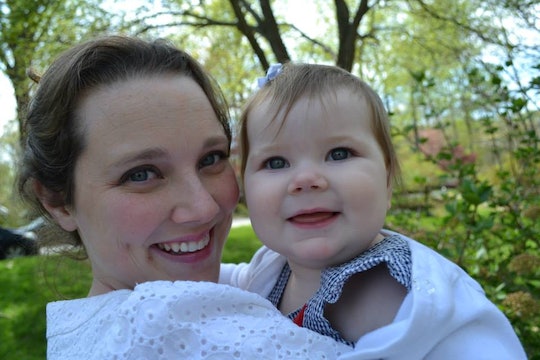 The Moment I Realized I Was A Feminist

But at some point, I realized that not only did I agree with feminists' stances on abortion, equal pay, and the destructive prevalence of rape culture, I realized that I was a feminist. And it made me wonder how I could've ever denied that for so long. It wasn't Girl Scouts or The Vagina Monologues that showed me just how important feminism was to who I was. It was the births of my two children.

Long before my kids arrived, I bought into the belief that feminism meant denying your femininity and perhaps trying to argue that men and women are the same. At the time I just didn't agree with that. Mostly I didn't agree because I saw myself in such a feminine light. I didn't think feminists could fully embrace their femininity. Even knowing now that I was incorrect, I didn't feel like I fit the mold of a feminist at all. I wasn't cut-throat in my career. I wasn't militaristic in my believes. I was a nurturer, first and foremost. I loved children and I couldn't wait to be pregnant. In a lot of ways, I put family before career. I was so happy in my feminine role. I didn't mind if my male partner held the door open for me. I didn't mind that he's the one who asked me to marry him. I didn't mind that I let him make the final decisions regarding finances.

Also convoluting my idea of feminism at the time? The fact that I love men. And I really believed that feminists hated men. I had (and have) a ton of wonderful men in my life that I would never label as the "patriarchy" and who would never mistreat women. But I was blind to the fact that my male counterparts had a lot of privilege that I didn't. (And I say that as a cis-gendered, straight, middle-class white woman.) They could walk down the street without fear of sexual violence. They were taken seriously as an intellects and artists. They fixed things with their hands and no one gave them a treat for a "doing a good job." But I was.

As a theater technician in college I solved some sort of technical problem (like a boss), and two of the male crew members were surprised I had figured something out. And that wasn't the first time I had surprised someone by being smart. I realized then that smart, problem-solving men didn't ever have that problem.

Yet even after the lightbulb went off (ha!), there was never a moment where I felt: "Oh my god, I'm feminist!" But I paid attention to the issues. I started to think about how I was treated in the workplace, because I had never really had a career before. I also had a hard time receiving the healthcare that I needed. Health insurance was more expensive for me than my partner, because I happened to have a uterus. As a result, I went to Planned Parenthood for my gynecological care. And once I realized what a lifesaver Planned Parenthood was, I couldn't help but wake up to the fact that society's laws and regulations were put in place in part to control me and my reproductive choices.

At some point, regardless of the fact that I was raised Catholic and knew I'd never ever consider an abortion, I became staunchly pro-choice. Perhaps it was because of my experience at Planned Parenthood. Or maybe it was because I'd met people who were young and not ready and who needed options. But mostly it was because I wanted women to have safe choices, even if they weren't the choices I'd make for myself.

And then I met people who didn't fit into our society's restrictive gender binary. I met some of them in college, but many more I met online. There was so much to learn there about how rigid our views of gender are. Men aren't encouraged to be emotional or nurturing, and if they are, they're insulted by being told they're acting "like a woman," like that's an insult.

But perhaps my biggest lesson in feminism came following the birth of my two children. All the issues I had been able to overlook because I was so used to them, I suddenly couldn't bare the thought of my kids dealing with them. I wanted my daughter to be taken seriously in any career she pursues. I want both of my children to oppose and fight against rape culture. I realized I was a feminist not only after the birth of my daughter, but especially after my son began experimenting with gender. I knew there was no other way. That all those moms had led me here, and my children had been the final lesson.

Now, for me, the issue of feminism comes down to a few questions, which suddenly seem like no-brainers.

Do I expect to be treated fairly at work?

Do I expect to be compensated the same as my male peers?

Do I want ownership of my body and my reproductive rights?

Do I want as many choices as men have?

Do I want to be valued for my brain and creativity and passion?

Do I want to walk outside without fear of harassment?

Do I want these things for my daughter?

The answer to all of those questions was a resounding yes, and it seems so obvious now that would be the only answer for me. I just didn't realize that feminism was about those things. I thought it was about rejecting the nurturing roles, or the feminine sensuality, or the pressure to put career first.

My kids came along and suddenly I was ravenous about finding my way through the issues. I wanted to stand up for women's reproductive rights. I wanted to be taken as seriously as my male counterparts. I wanted to learn what I could do to be a good person and an ally to marginalized people. It's not that I didn't want these things before, but bringing new life into the world — twice — made it all such more much real for me on a personal level.

I hate that my daughter will likely get sexualized at an early age. Or that my son will be teased if he acts in a feminine manner. I hate that anyone besides me would get a say in what happens to my body. I hate that violence against women is so prevalent. And really, I just hate being told what to do for something as arbitrary as having a vagina.

So yes, I am definitely a feminist. And I thank my kids every day for reminding me of that.