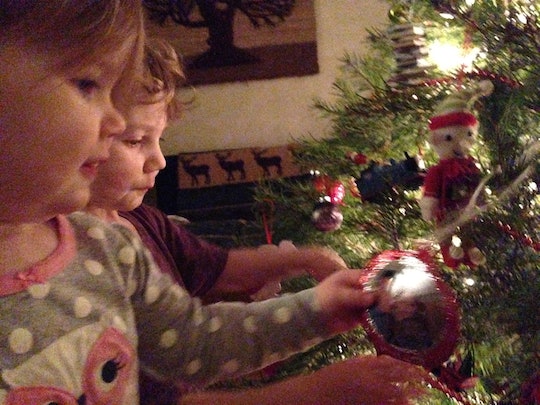 Why We Celebrate Christmas Even Though We Don't Believe In God

This year, like every year before and every year after, my family will celebrate Christmas together without focusing on religion. My partner and I are agnostics who have made the conscious decision not to teach our children any given set of beliefs, mainly because we don't believe any of these things ourselves. If, later in life, my son and my daughter choose to believe in something at some point, that's great. Until then, we're making our focus on morals for humanist and altruistic reasons, things like generosity, fairness, and kindness (always with the caveat of self-protection first).

I've shed my Catholic upbringing (mostly because of their views on LGBTQ issues and my own issues personal issues surrounding sexuality) and my partner has similarly abandoned his Lutheran identity. We are not religious anymore. I guess you could say we aren't Christians — since we don't believe that Jesus was divine; culturally though, we are Christian, namely in the holidays we celebrate and the stories we've grown up with. Even though I don't practice, I still feel Catholic in a lot of ways. I have a big Irish family. I still have a fondness for the saints. I still feel right at home at Catholic weddings and funerals. I still celebrate Christian holidays including Christmas.

Even so, I've come up with reasons why I celebrate Christmas with my kids: I still value the traditions and the emphasis on togetherness and on generosity that come with the holiday.

It's why I still talk about the birth of Jesus. I still have a little nativity set, and my children love to look at little baby Jesus in his manger. Instead of emphasizing that he is the son of God, I've turned the story to one of generosity. After all, a very pregnant and in labor Mary needed a place to sleep and deliver her baby. Her husband did all he could to support and provide for her. And a nice inn-keeper saw they were in need and offered all he could: shelter in a barn. That is a lovely story.

Not only is it a lovely story, but it's a timely one too, considering the current Syrian refugee crisis. I want my children to know and understand true generosity so that they make the world a better place. I mean that on a global level, but also on a personal one. I want them to sit next to the kid who is lonely on the bus.

To take the lesson of generosity one step further, we read The Little Drummer Boy (with illustrations by my favorite: Ezra Jack Keats). This book tells of a little boy who, despite having no wealth and no gift to give Jesus, decides the gift he can give is to play his drum for him. We talk about how we always have something to give, even if it isn't an expensive gift.

We revel in giving. We've started a new tradition of picking out toys we no longer use and donating them. Now that my son is old enough to understand, he happily lets go of his less-used toys and is happy that they will make other kids happy. Sure, it makes sense to make room for the new ones they're sure to get, but they're happy to be giving away the toys to other children who might need them. I let my son pick out small items for our closest friends and family. He helps me wrap them. He delights in seeing their reactions as they open the gifts he picked out. My father has a pair of socks that look like hamburgers, and my son grins whenever he sees his grandfather wearing them — which is, to his delight, often.

If generosity is the foremost lesson and tradition my partner and I want to instill, togetherness isn't so far behind it. This is the time of year that we put family time above every thing else.

It's so appealing at this time of year, when the days are at their shortest, to huddle around hearth and home and focus on each other's company and enjoy doing things together. We spend more time in the kitchen baking. We read a lot of books together. (My kids get a new book every day in December as we count down to Christmas.) We take our time in decorating the house with care. We watch holiday movies together.

In general, we seize any opportunity to do things all together. In fact, Christmas's proximity to the Winter Solstice is not a coincidence. And all the festivities and lights and cheerful family time helps keep my own depression at bay. I find that having things to look forward to and plan helps pass the time until the longer days, when things are easier for me. It makes sense that our ancestors would choose this time for a feast and a celebration: they were just trying not to go nuts without enough sunlight.

We've had no problem celebrating Christmas and enjoying all of its traditions without explaining that God is this all-knowing being that we should fear and respect and love above all things. And for that, I'm glad, because it was the one thing I struggled with. Growing up, I wanted to be a nun, and my biggest aspiration was to be sainted, and yet I struggled to love a being I'd never met more than I loved my parents.

Constantly being told I should put God first was a really tough and impossible thing for me. I felt that even when I tried as hard as I could to be a good Catholic, I fell short. I don't want my kids to be good because they should be. I want them to be good because it's the right thing to do, and because it will lead to a happier and more fulfilled life for them. I also want them to appreciate life at face value. In a lot of ways, I felt as though growing up to believe every miraculous and magical thing in Catholicism made growing up a hard reality.

When I realized I didn't agree with all of the Church's teachings, I was disillusioned from the church. I believed in it all: miracles, saints, guardian angels, heaven, hell, Jesus looking out for me; Mary looking out for me. I believed that if I was a good enough girl, I'd get a miracle out of it. Of course that seems childish at best and ridiculously selfish at worst, but I was a kid. It was like the moment I found out Santa Claus doesn't exist all over again, only so much worse.

It's part of the reason why we don't tell our kids about Santa. Or, well, obviously he comes up, because he's everywhere, and yes, we've visited him at the mall. But we don't pretend like any of the presents under the tree are from him. We don't add magic where there is none.

Despite that, my son has decided he believes in Santa Claus anyway, because I told him he could choose what he believes. It definitely prepared me for the bigger questions about life that he might come up with as he gets older. He chooses to believe, and I don't refute it or fully go along with it. Just because he chooses to believe in Santa doesn't mean I'm gonna give someone I don't believe in credit for some of the gifts I've gotten my kids.

There's enough magic in the holiday without actual magic. I don't need Santa Claus or to believe Jesus is the earthly manifestation of God to enjoy Christmas. I need my family, maybe a tree, and some good music. A little eggnog wouldn't hurt. I need tradition and to be grateful for the comforts we have. I need to give generously. I need to provide a culture and traditions that my children will treasure for the rest of their lives. If that isn't magic, I don't know what is.