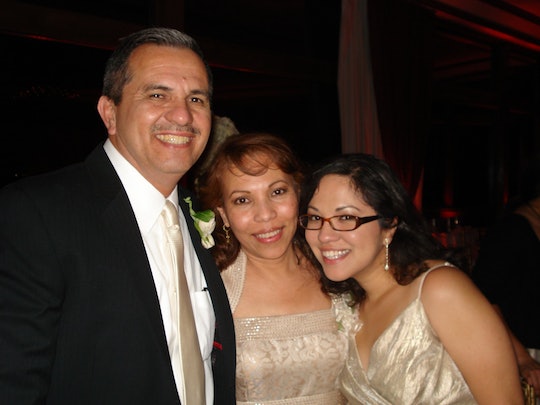 I'm The Daughter Of Immigrants, And This Is How I Feel About Closing U.S. Borders

My parents grew up in Nicaragua, the second poorest country in the Americas; a country with a complex history of political unrest. Neither of them ever had any dreams or aspirations of coming to the United States to start a new life. Then a war broke out in their country and things began to slowly spiral out of control. Like my parents did so long ago, millions of Syrians now find themselves living out a nightmare. Recent attacks in Baghdad, Beirut, and Paris — and air strikes in Syria helmed by France, Russia, and the United States — have only furthered their fears: Will the U.S. close its borders? Should the U.S. close its borders?

In the '70s and '80s, my parents both believed in the Sandinista Revolution at first, believed in the promises of the movement’s leaders, like Daniel Ortega, who vowed to oust then-President and Dictator Anastazio Somoza Debayle and the entire Somoza regime and return power to the people.

When my mother began her career as a teacher, my father went to war. The Somoza regime rounded up young men they feared would fight against them and executed them. Through a friend, my mother found my father’s name was on the list. She got word out to him and, fearing for his life (and for my mother’s by association), he escaped the country and fled to America. At the time, my mother was pregnant with my brother and decided to stay behind, in fear of losing her baby. It would be three years before my parents were reunited.

My parents' story isn’t unique. There are stories just like this within every immigrant and refugee population. Most refugees are just people who were given a bad hand thanks to outside forces, either due to political unrest or generalized violence within their homeland. These are people, like my parents, who oftentimes don’t want to leave their homes, but simply have to in order to survive, or to provide better lives for their families, or both.

Fleeing to America was never their dream. It was their only hope.

Speaker of the House Paul Ryan has already met with Republicans to plan a way to halt President Obama's plan to grant asylum to thousands of displaced Syrian families. Ryan told reporters that our country "... cannot let terrorists take advantage of our compassion. This is a moment where it’s better to be safe than sorry."

But Speaker Ryan is wrong about this. The refugees escaping the on-going civil war in Syria are not, as a whole, violent people or terrorists. They are individuals, like my parents, who've found themselves in a terrible mess. They are people who have lost everything. Friends. Loved ones. Their homes. Their most beloved possessions. Their schools. Their streets. The very clothes on their backs. They are people who need help. A refugee is, by definition, someone who's been forced to leave their country in order to escape violence and persecution. Closing our doors to these individuals will not make us any safer.

Roughly four million individuals have fled Syria and into neighboring countries in the past four years. This isn’t counting the seven million plus who've been displaced and remain in Syria, who may make up the next wave of refugees. These people, much like those in Paris and Kenya and Beruit are hurting. They too have lost friends and family members, their homes and careers and places of business, and they are knocking at our doorstep, asking for mercy. As a nation, we can offer them that.

My family was fortunate enough to land in Miami in the 1980s. President Reagan (after his initial involvement in the Iran-Contra scandal) signed the Immigration Reform and Control Act of 1986 which gave amnesty to undocumented immigrants who arrived before January 1, 1982.

It is now 2015 and my parents are hard-working business and property owners, upstanding citizens who vote and pay taxes, and individuals who are proud of their status as American Citizens.

From an early age, I was taught to follow the rules and to work hard, to never steal and to always treat others as I'd want to be treated, and to always, always be grateful. My parents never spoiled me monetarily because they never could. I never threw tantrums in check-out aisles when I wanted a new toy because I knew what my parents could and couldn't afford. For much of my childhood, we grew up in a one-bedroom duplex. There were no family vacations, no annual trips to Disney World, no elaborate birthday parties with bounce houses and magicians. But there was a lot of love and a lot of respect, for each other as well as for the country in which we all now lived. I have always known how lucky we were then and are now to live in a free nation, where I never had to wait in line for my week's ration of bread and milk, where I was guaranteed an education, where I had a shot at a better life. I can only imagine that this would be the same for any refugee that came to our country.

And yet there are those (like a certain presidential candidate) who would have you believe that all immigrants are rapists, liars, and thieves. These are the same kinds of people who'd also have you believe that opening our doors to refugees would only bring extreme jihadists into our country, or worse, that would espouse hate speech equating all Muslims with terrorists.

There are those who would suggest that rather than providing a safe haven to the families who are suffering, who are hungry and tired, whose children have now gone months (if not years) without proper education, much less toys or any real semblance of what childhood should be, we should instead tighten security and increase surveillance, tactics that would not only affect the refugees but all those living in the United States. Already, we have governors (in Alabama and Michigan) stating that they won’t allow any refugees into their states, citing the “safety” of their residents.

These attitudes not only hurt down and out refugees, they hurt everyone. As the daughter of immigrants who were forced to flee their home (first for survival and then, as my mother did, to join her husband in the hopes of a better life), and as the friend of many who've made that journey in their own lives, I recognize what a challenge it is for people to start over in a country where they don’t speak the language, where their advanced degrees don’t mean a thing, where they are often hated for simply existing.

My own father learned the language and worked long hours under the sun in construction, the only field where he could make a living. And my mother had to leave a prominent career in education where she was about to be promoted to principal, to only occasionally work retail and daycare jobs (after having to pay for certifications, despite all her experience). Anyone who says that immigrants and refugees are lazy or that they come to simply mooch off the government hasn’t yet learned that what they are saying is a flat out lie.

It’s because of my own story, and that of my parents, that I feel so strongly about allowing more Syrian refugees into our country. To date, less than 2,000 Syrian refugees have found a new home in the United States. That’s about .05 percent of all refugees, most others of which are currently packed like sardines in countries like Turkey, Lebanon, and Jordan. Still others have found asylum across the European Union. Consider that Germany alone has given refuge to over 92,000 Syrians since 2012 and you might begin to realize why it’s shameful how little we’ve helped out. As if that weren’t enough to make us recognize the error of our ways, 10,000 Icelandic residents recently opened their own homes to refugees simply out of the goodness of their own hearts.

As a nation, we should do everything we can to demand that our government allow more refugees into our nation, lest we repeat the same mistakes of the past, lest we should turn away those who needed us most. President Obama has stated he’ll allow up to 10,000 Syrian refugees into the U.S. in the next year, but only time will tell what happens next — or even if that happens next — especially in the wake of the Paris attacks, which have resonated strongly with the American people.

Perhaps with an influx of Syrian refugees, though, we'll finally begin to see these people for who they really are: people, just like us, wanting a safe place for their kids to grow up, wanting fresh food and clean drinking water and access to proper medical care, wanting opportunities to build thriving communities. Wanting peace above all else.