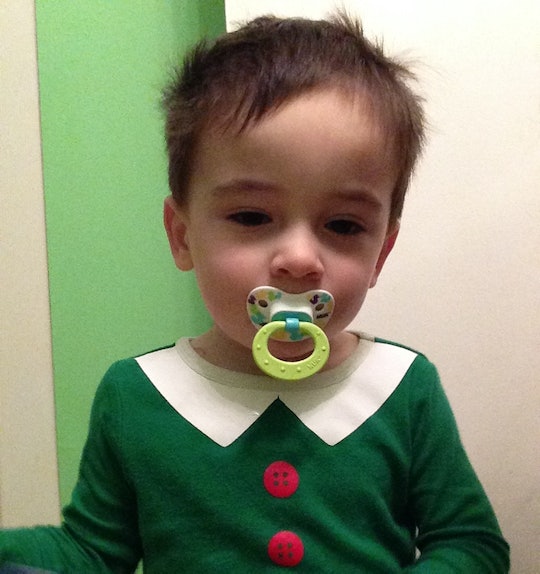 I Made My Toddlers Watch 'Elf' For A Week Straight, & Here's What Happened

Like many 2 year olds, once my sons like something they can get a bit obsessive. I've already lived through a Willy Wonka phase and a Daniel Tiger phase, and I've learned that if my kids are going to insist on using their screen time to watch the same thing every night, it's smart to try and steer them towards a movie I enjoy too. The Grinch scares me and the Charlie Brown soundtrack is depressing, so I decided to show my kids one of my favorite adult Christmas movies: Elf. On repeat. For a week. #Parenting. 'Tis the season to be jolly, and I figured if the boys could watch Willy Wonka everyday for a month, why not watch Elf every day for week right before Christmas?

Elf has become a new classic in our house, and I was hopeful that my boys would pick up some of the more memorable quotes to repeat at holiday parties. Plus I was excited by the possibility that they would learn the words to Baby It's Cold Outside for a festive mommy/son duet.

The rules were simple: Elf on repeat for a week. We'd already marathoned Willy Wonka, and after that, I was convinced my boys could do anything. We weren't necessarily lagging in Christmas spirit (my boys could power a large office with the voltage of their spirit), but if the boys were going to become obsessed with a film this season, it definitely wouldn't hurt if it was one I was into as well. (It makes watching it nonstop a little less painful.)

Did my kids fall in love with Elf as much as I did? Or did we all find ourselves not feeling very jolly after watching? Here's what happens when you let your kids watch Elf for a week straight.

When I watched Elf before becoming a mom I thought Buddy was hilarious and everyone around him needed to lighten up. But as a mom, my entire perspective of the movie has shifted. It makes perfect sense that Buddy gets on people's nerves because he behaves just like a toddler — the endless questions, extreme highs and lows of his emotions, the blurting out every thought that comes to mind without a filter. Watching this movie for a week straight was like having a third toddler in my house every afternoon.

Once the movie ended each evening, I was even more ready for bedtime than usual.

Buddy Is An Awful Role Model

Adults love to quote Buddy. "Santa, I know him!" and, "Smiling is the best!" are well-known Elf quotes. And sure, when my own kids started to mimic these lines it was adorable and I pulled out my iPhone to capture the moment, as one does, but Buddy has a lot of habits you do not want your toddler to pick up on. My boys tried to do splits on an escalator and wanted to run around a revolving door in a packed Times Square restaurant. They now know it's possible to press every single button on an elevator and think a piece of abandoned gum on the sidewalk is a free sample. It's led to a lot of questions and looks from strangers, and chasing after them suddenly became more exhausting than usual.

I can say from experience that being called a cotton-headed ninnymuggins stops being funny to everyone but the toddler after the first 20 times. Thanks for nothing, Buddy.

The Shower Duet Is No Longer Cute, It's Creepy

The first time I took a shower after watching Elf, I couldn't help but sing Baby It's Cold Outside, and if you say you didn't do the exact same thing, you're lying. The song has a catchy cadence and the echos of the bathroom make everyone sound like a finalist on The Voice. I've tried in vain for years to get my husband to sing the duet with me to no avail, but I was hopeful that I could convince the kids to sing with me.

It's obvious that Buddy doesn't have any ill intentions by sitting in the bathroom and singing along Jovie, but after a week of listening to the lyrics of this song, I wasn't so sure having my boys sing it would be something to be proud of.

This song is about a woman who wants to leave but is being pressured by her date to spend the night. It may be a Christmas classic, but it's woefully out of touch in today's society. By the of the week my kids were crooning along with the "No, no, no" line of the song, and if they had to learn any of it, I'm glad they at least honed in on the part about consent.

When I saw that Elf was rated PG, I knew there could be some scenes of minor violence or adult language that my preschoolers would see. My New Year's resolution is to clean up my own language, as I have a tendency to swear more than I'd like to, but I knew they wouldn't hear anything in this movie they haven't already heard at home. Slapstick-style physical comedy doesn't make me clutch my pearls either, so I thought there was no reason not to show the movie to my almost-3 year olds.

What I didn't take note to realize before we put the movie in for the umpteenth time was that Elf suffers from an abundance of Santas. There's the real Santa from the North Pole, a gentleman in a red jogging suit on the street that looks like Santa Claus, the mall Santa, and dozens more that you can spot throughout the film. Just as I was explaining to my kids that Santa has helpers who look like him to spread Christmas cheer, we reached the scene were Buddy rips off Santa's beard and they get into minor scuffle.

The kids cried while I cringed and dove for the fast forward button. After many assurances that Santa was OK and that he'd still bring them presents on Christmas Eve (and a healthy dose of Christmas cookies to ease my guilt in traumatizing them), they calmed down and we skipped over that scene for the rest of the week.

Forget telling me if a movie is rated G, PG or PG-13, there should be an additional Santa rating on all holiday movies warning parents if watching this movie could ruin the secret of Santa Claus.

Is Elf A Must-Watch Family Movie?

Even though Buddy has lost some of his appeal over the years as I've matured, Elf is still a modern classic that I'm sure my kids and I will watch for years to come. Yes, Buddy's habits and obsession with sugar are much more enjoyable on screen than they are when your kids are copying him, but at it's core the movie is one about keeping the spirit of Christmas alive as an adult.

Elf works as a movie because in a way, Buddy is all of us as children during December. I know that one day my boys will learn that Santa Claus is more of a feeling than a real person. When that day comes, I hope they'll remember these first few Christmases as times when they so excited by the magic of the season that they got carried away, just like Buddy. Till then, I'm going to hide the movie.