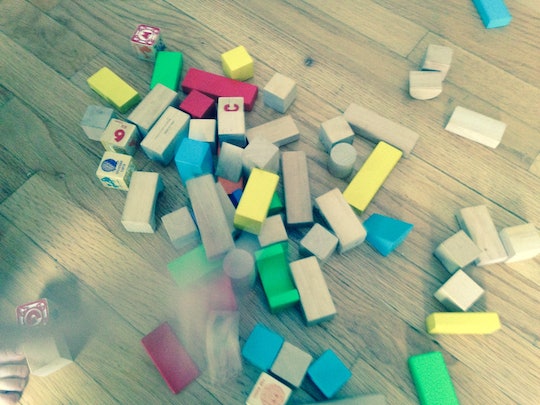 I Lived Like A Toddler For A Week, & This Is What I Learned

When it’s late at night and I’m exhausted from another day of cleaning, cooking, working, going to the gym, and just general adulting, I peek in on my sleeping children. Seeing them sprawled across their beds in a deep sleep calms me, but it also makes me jealous. The life of a kid seems pretty sweet. They pretty much do and say whatever they want whenever they want, and as long as it’s not dangerous, they’re probably going to get away with it (and if they’re at grandma’s, they’re definitely in the clear).

My kids never make it more than an hour without cracking up at something simple, and even when they’re upset, they manage to shake it off faster than Taylor Swift. There world is the size of whatever room they're currently in, and their stress levels are easy mitigated by the presence of their favorite snacks. Their lives rule, and I am endlessly jealous. Yes, being a kid has it's shortcomings, but overall it's pretty fantastic. There are plenty of moments when I wish for the clarity of life as it was when I was 2-and-half years old. No bills, no responsibilities, and all the chocolate you want. And that's when it hit me: What if I tried toddler on for size again?

I started to wonder if my life would be less stressful and if I’d sleep better at night if I followed my 2-year-old twins' example. Sadly, I still had to pay bills and work, but I took a week to adopt five common toddler behaviors to see if they could help me lead a happier life. I wanted to know if being more open and honest in my communications, eating only what I wanted to, dressing according to my mood, and wearing my heart on my sleeve would work in the adult world, or would they just make me feel like a big kid?

I went to the front lines, and here's what I found out.

My kids have zero filter. Whether it’s poking at one of my stray chin hairs or telling me they don’t like my sundress, they have no trouble saying exactly what’s on their mind at all times. As adults, we know the difference between being honest and being rude, but there are so many times in my life where I bite my tongue for the sake of not starting an argument. I promised myself that for one week I’d speak my truth, even if I thought it might make someone else uncomfortable.

I had my chance when we took a trip down to my mom’s house for a family dinner. My younger sister was there, and as she often does, she took the opportunity to comment negatively on my parenting skills. This time she objected to the number of graham crackers I was letting my boys eat. While I love her dearly, she doesn’t have children of her own, a fact that always bugs me when I’m getting unsolicited advice. Typically I wouldn’t have said anything to to avoid a fight — I’d play out every retort in my head instead — but this time I stood my ground and told her she was wrong.

She rolled her eyes at me and shook her head in response. While it wasn’t an apology, I was still really happy with myself for speaking up. It didn’t erupt into a huge fight and I didn’t fixate on it. It was said and done, just like that. Maybe honestly really is the best policy.

It’s super frustrating when I put forth the time and effort to prepare a healthy meal for my family only to watch my boys take half a bite, declare they don’t like it, and ask to be released from their chairs. Their diet mainly consists of eggs, ketchup, chicken nuggets, any type of potato, peanut butter and jelly, cereal, goldfish, crackers, and fruit smoothies that I sneak handfuls of spinach into so I don’t feel like a complete failure. They know what they like and they aren’t ashamed about it, so I decided to follow their lead (and my stomach’s) and eat what I wanted without feeling guilty about it.

I mainly eat grilled chicken salad for lunch because I want to be healthy, but some days, especially after a long run, I get jealous when I’m making my kids their standard fare. They don’t worry about what people will think if they eat bread or if it’ll be a big deal if they ask for more. It was great to nosh on a PB&J when the urge struck and eat a grilled cheese with tomato soup on a rainy day, but I was surprised by how much my meals didn’t change even when I gave myself permission to eat what I wanted. It turns out I actually do enjoy fruits and veggies and prefer them to processed foods.

Dessert was another story. Like my kids, I have a sweet tooth, and I didn’t stop myself from indulging. I had ice cream every single night, and even though I tried to keep myself limited to a toddler-sized portion, I thought I might regret my choices when I got on the scale at the end of the experiment. When I did weigh myself and thought back on my week of sweet treats, I realized that I was comfortable with my choices because I enjoyed what I ate. I struggle with my body image, but knowing I was doing something I enjoyed made me think about living in the moment a bit more.

Even if I’m not hungry, I always make room for lunch and dinner, mainly because I’ve been conditioned to feel like I’m missing something if I don’t have both. But this week, I followed my boys’ lead: I ate when they ate, but I ate what I wanted — no more, no less.

I suffer from IBS and am in the middle of a bad flare up so I wasn’t really sure how this week was going to go, but surprisingly, I was less bloated and uncomfortable than I thought I’d be eating whatever I wanted. Taking the time to check-in with myself and see how hungry I was before eating helped calm my digestive issues and actually made my IBS more manageable. Not only will I stop badgering my kids to eat just because it’s “dinnertime”, I’ll keep up this routine too, mainly because it’s made my body feel so much better.

My kids love their pajamas, especially the ones that look like Santa Claus outfits. Sometimes in the morning when I’m trying to get them dressed, they’ll beg me to keep their pajamas on. Over time, I’ve gone from forcing them to get changed, to letting them stay in their PJs if we aren’t leaving the house, to saying YOLO and letting my little elves spread holiday cheer around the grocery store in the middle of summer. If they’re happy and not naked, I count it as a win.

This week, I decided to forget the rules of fashion and wear anything I wanted. I dressed in whatever I felt like for a week, including one day when I was practicing for Zumba class and decided I really needed my running tutu at that very moment.

While I loved pretending it was PSL season, trying to run errands in a chunky cable-knit sweater was a poor decision. Once I left my climate-controlled house, I was a puddle of sweat. The lesson learned is to wear whatever makes you feel good in your skin -- as long as it’s weather appropriate, lest you perish from heat stroke or hypothermia.

Toddler Rule #5: Express Your Emotions When You Feel ‘Em

My kids wear their hearts on their sleeves, unafraid to stand in the middle of the living room and wail if their granola bar breaks in half. I tend to be more reserved, saving my breakdowns for the bathtub or working through my frustrations with a sweaty workout. This week I worked on feeling my emotions in the moment instead of stuffing them down for later inspection. Although I was a little hesitant about having a meltdown in the living room over a granola bar, I really wanted to give this leg of the experiment the emotion it deserved.

Our front door is just steps away from the condo parking lot, and while we have a deadbolt and chain lock on the door, there was a day this week when both my husband and I thought the other had secured the door. Luckily I was standing only a couple feet away when I heard the front door open, but those few seconds were enough time for both boys to slip outside, and one of them was already out of view by the time I got to the front steps.

Thankfully he decided to head to the backyard and “pick-a-toe-mato” instead of the parking lot, but my heart was in still in my throat as I led him back into the house. I lost it, sobbing my heart out right there in the foyer in front of the kids. They’ve never seen me cry like that, and I was touched at how empathetic they were in trying to make me feel better. The next time one of them tried to open the door, the other said, “No, no, Mommy sad!” so I want to believe that letting them see how upset I had gotten had a stronger impact than yelling or saving my meltdown for later.

While I wouldn’t want to go back and relive my childhood all over again, kids can definitely teach us a lesson about living with less stress. I learned a ton doing this experiment. Although I’ll definitely continue to consult the weatherman before dressing for the day, toddlers really can teach us things about eating to fuel our bodies and expressing ourselves.

I’m going to continue to be more honest with people when I’m upset with them, and work on telling people when and why I’m upset instead of keeping those feelings to myself. When it comes to my diet, I’m going to keep listening to my hunger cues to eat what I want, when I want to, and I’ll try not to overreact on days when my kids only pick at their plates.

More than anything, my boys taught me that staying in the moment and not sweating the small stuff are easy, effortless ways I can keep my inner child alive, even as an adult. Plus, PB&Js are delicious.