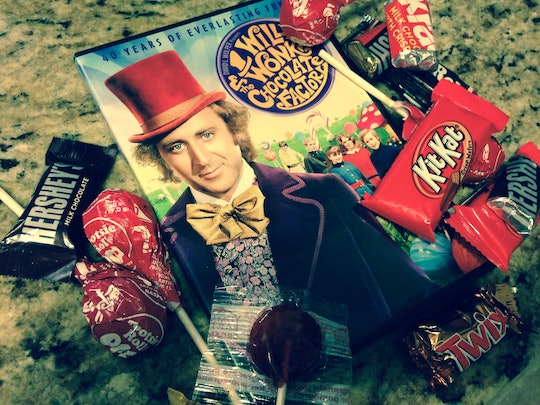 I Let My Kids Watch 'Willy Wonka & The Chocolate Factory' Every Day For A Month, & Here's What Happened

I don't know when, why, or how it came to me, but one day I had the genius idea to let my twin toddler boys watch one of my favorite childhood classics. Then the Willy Wonka & the Chocolate Factory cast reunited to celebrate the film's 44 birthday, and I knew that yes, divine intervention is real, and it sometimes comes to you in the form of a movie about chocolate. Some researchers claim watching one show repeatedly can help toddler learn more quickly and easily by having a strong attachment to a particular character, and having reached my saturation point with Daniel Tiger's Neighborhood and unable to stomach another minute of the bald brat known as Caillou, I thought encouraging my kids to form an obsession with Charlie Bucket, Grandpa Joe, and Willy Wonka would serve as a win/win for all parties involved.

I want my toddlers to be smart, but becoming a mom didn't magically cure my tendency for laziness (and hello, science basically begged me to do this!) If there's a shortcut I can take to help my kids make the Honor Roll one day, then I'm all for giving it a try. I don't believe I'm melting their brains by letting them watch a movie once a day, and come on, what kid wouldn't want to watch chocolate in several thousand forms over a two-hour period? (To that end: what adult wouldn't?)

My partner and I are big-time fans of Broadway shows and live theater and I loved the idea of getting my boys excited about musicals, so I decided to let them watch the original Willy Wonka & the Chocolate Factory every day for a month to see if they learned anything new. A month seemed like a commitment, but I was desperate. One more sharing song from minds behind Daniel Tiger or one more rerun of Caillou and co. and who knows what would've happened. Plus, Charlie takes Grandpa Joe with him to the chocolate factory, which is a pretty awesome example for my boys to see. (And let's not forget he's legitimately excited about a chocolate bar!)

Here's what happens when you let your kids watch a movie about a recluse, a little boy, and a chocolate factory every single day for a month.

Week One: Bragging About My Parenting Skills

The entire first week I let my kids watch Willy Wonka, I tried to force a variation of, "Oh, your toddler is loving The Tigger Movie? Mine are really into screening Willy Wonka right now, because I really want them to appreciate film, sooooo..."  into every conversation I had. Then I'd work in some comment about how the remake is more authentic to the book but the original has more charm or something else super obnoxious.

I thought I was a cool hipster parent raising quirky and interesting kids solely based on the fact that I was letting my DVD player act as a babysitter for a couple of hours every evening. Sure, they liked the movie and ran to the screen every time the credits started to show that lovely montage of chocolate, but they're 2 — anything with movie pictures and music blows their mind.

Between the smugness that came off of me in thick, cloying waves and the fact that I randomly burst into Oompa Loompa songs, I'm surprised my friends didn't push me into a chocolate-colored river at any point during this experiment.

Having now watched the film for two weeks straight, certain red flags were starting to pop up. As a child, I thought Ms. Bucket's slow and boring ballad, "Cheer up Charlie," was the worst part of Willy Wonka, but really, that's the least of film's issues.

And I hate to say it, but Grandpa Joe is kind of a jerk. Not only does he spend the first third of of the movie lazing about in bed complaining about the food he's served and the room temperature, even when he does defy all medical logic and spring out of bed, he proves to be a horrible role model to his grandson. He encourages Charlie to steal bread and Fizzy Lifting Drinks drinks and appears to have zero qualms about illegally selling off Wonka's secret Everlasting Gobstopper recipe to Slugworth.

The zany boat scene always creeped me out as a kid, but it's just as disturbing as an adult. There's bugs crawling in people's mouths and a chicken getting its head chopped off and none of it has anything to do with the plot of the actual movie.

Every time the boat scene was on screen, I either tried to block the kids' view of the screen or hit fast forward. So far they don't seem freaked out about it, but I'm putting some savings aside for their future therapist appointments just in case.

Both of my kids strongly identified with Veruca Salt, which I loved because growing up she was my favorite character as well. While the movie is on, they'll have periods where they wander off to play with something else for a bit, but whenever Veruca is in the spotlight they start elbowing each other for prime viewing space in front of the television.

As a child, I loved Veruca in spite of her demands, but as an adult I love her because of them. What translated as a lazy, bossy little girl with an awesome voice when I was younger now strikes me as a strong, decisive girl who's not afraid of delegating tasks and speaking her mind. It's been 25 years since I first saw the movie and as it turns out, I still want to be Veruca Salt when I grow up.

By now, the boys have memorized the entire movie. It's entertaining to watch them wave their arms around saying, "I got it, I got it, I got the Golden Ticket!" A video of them singing "I Want It Now," complete with marching, plucky leg swinging and pulling their hair out was a huge hit with the grandparents. But it's less adorable when they run around chucking their toys out of bins because they're pretending to be Veruca, or smear oatmeal all over their faces so they look like Augustus Gloop.

And when I saw them trying to lick the walls, just like the kids do in the film, I was less charmed and more worried because I couldn't remember the last time I'd wiped them down or whether the paint was lead-free. For an experiment that was supposed to be making my children smarter, this seemed like a fail.

Week Four: Finding A Place To Hide The DVD

In the spirit of being honest: I can't take it anymore. From the second they wake up in the morning until the moment I finally relent and put in the movie, all my children do is beg me to watch Willy Wonka. Since media time isn't until after dinner, this poses a huge challenge to our day. I try distracting them with toys, books, games, the mailman — anything to shift their focus to something else. I even resort to lying, telling them the DVD player is tired and needs a nap in order to get them to forget about Wonka and those tiny orange men.

I think letting them watch television for such a large block of time at the same time each day was a mistake. My toddlers are creatures of habit, and whenever they get used to doing something, they tend to become fixated on it, and I'm worried the issue was made worse by only showing them one movie for 30 days in a row.

This obsession probably would have happened with any movie I showed them so many days in a row, not just Willy Wonka & the Chocolate Factory. Even if showing them the film repeatedly has helped them learn new words and songs, I probably could've had a similar learning effect and less tantrums by throwing a couple other movies into the rotation. I guess I'll never know, though, because I'm not sure any of us can take another movie for a month straight — even if it is one of my favorites.

Is Willy Wonka A Role Model?

If the brouhaha I've seen in stores and on Facebook over Frozen is any indication, I know that toddlers have a tendency to get hooked with particular movies. It's a bit unconventional that my kids were drawn to the magic of Willy Wonka & the Chocolate Factory over a cartoon, but that's solely because I encouraged it. Their choice of a 1970s film over a contemporary cartoon doesn't make them any smarter or any more artistic than their peers.

My kids did learn a bunch of new songs and lines from the movie, though I don't think watching Willy Wonka & the Chocolate Factory for a month straight made them smarter. They've surely improved their rhythm, but I wouldn't say this was an educational experience. It's possible repeated viewings of a movie or long show that's designed to teach little kids new things, like Sesame Street, would yielded better results, so maybe we'll fall in love with Elmo for a while and see if it helps them count to 20.

Having kids who can sing an old classic like "The Candyman Can" is a fabulous play group trick to amuse your friends, but it's not worth having kids that act like spoiled brats the rest of the time. As soon as the kids are asleep I plan to accidentally-on-purpose drop Willy Wonka behind the couch and intentionally forget about it for a good long while.