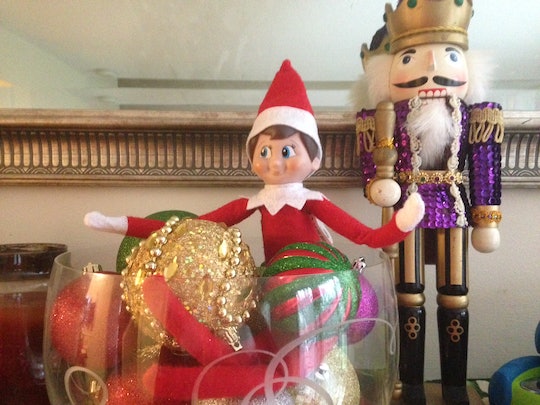 I Love Elf On The Shelf, & I Won’t Ever Apologize For That

Like the great Anne Hathaway backlash circa 2013, doing the whole Elf on the Shelf thing with your kids during the month of December was the cool, hip thing to do — until all of a sudden it wasn't. Regardless of its status as a trend or not, I love doing Elf on the Shelf with my kids. But having to defend that choice to parents who don't and seeing my Facebook feed clogged with status updates detailing how awful the Elf is makes me feel bad for trying to enjoy the holiday season with my family, and I'm sick of it. Beyond the fact that I like seeing my kids get excited over finding the Elf each morning, I fully admit that I enjoy being able to deploy the Elf as a deterrent when my kids misbehave. Disciplining kids is hard work, but molding twin toddlers into decent human beings is downright exhausting, and I'll take any help I can get, even from an inanimate object.

The Elf on the Shelf doll comes with a picture book which explains his backstory: essentially, he acts like a caseworker for the department of S.A.N.T.A, and the Elf comes into each kids' house every morning throughout December to keep an eye on how said kid is behaving. In order to keep Santa included, he uses his magic to report back to the North Pole every night. He can't talk, and if you touch him his magic goes away, but he'll move to a new location each morning for kids to discover when they wake up. It's simple, harmless, good fun. Why some people hate the Elf and want to see him tarred and feathered is beyond me.

Some families go all out with their moving the Elf, setting up elaborate scenes or creating calendars in advance so they know what they'll do each night. My kids aren't quite 3, and while I'm creative, I'm also lazy, so my husband and I consider it a win whenever either of us remembers to move the Elf even just an inch before we go to bed. Most mornings one of us runs downstairs ahead of the kids to fling the Elf in a new location that's high enough so the boys won't be able to touch it.

This works for us for now, but I'm looking forward to the years to come when I can do fun things like put the elf in a tub of marshmallows or have him make snow angels. I even made our Elf bendable by infusing his limbs with thin metal wires, kind of like the procedure that created Wolverine.

It is necessary to put so much time and energy into an doll? Of course not. But parents who enjoy doing so aren't hurting anyone else. Winter is dark and boring and cold, and there are only so many shows to watch on Netflix. If coming up with new Elf ideas is how my husband and I bond after the kids go to bed or how I like to spend my downtime, it shouldn't offend someone else.

Although my children are generally well behaved, they're not immune to bouts of the terrible twos. With less hours of sunlight and colder temperatures, we're cooped up inside more this time of year than any other. On those days when the kids are acting up and I've reached the end of my rope, being able to point to the wide-eyed Watcher on the Shelf and reminding the kids that the Elf will report back to Santa is extremely helpful in stopping a squabble over the purple block in its tracks.

The Elf on the Shelf now has clothing available to purchase, which some parents find particularly outrageous, and that's fine. That's their right. Yes, $60 is quite a hefty price tag for a three-inch piece of fabric and some doll boots, but a family's disposable income is just that: disposable. How they choose to spend it no one's business but their own.

I don't see myself buying our Elf any of his own clothes, especially since if I really wanted to I could knit him a snazzy ensemble on my own, but it's not so different from parents who purchase American Girl doll outfits, video game consoles, or any other expensive toy for their kids. If you don't like it, you don't have to buy it, but there's no need to make parents who do feel badly about how they choose to spend their hard-earned money.

Grinches against the Elf on the Shelf say it's too much work, or that it promotes harmful lying to children, but for me, the Elf is all about adding to the magic of Christmas. The Elf is merely and extension of the Tooth Fairy, Easter Bunny, or even Santa Claus himself. My boys will grow to know the stories of these other magical beings, so I don't see the harm in adding in the Elf on the Shelf to the mix. And rather than have my children see December as merely a month they want to rush through in order to get to the bounty of gifts that awaits them on Christmas morning, I want to encourage them to enjoy the spirit of the season all month long.

Doing Christmas-themed activities like the Elf on the Shelf will hopefully remind them that Christmas is about more than a single day of gifts. Hiding and finding Elf invokes a feeling of happiness in all of us, and as sappy as it sounds, that's the part of the season I want them to remember and reflect upon as they grow up, not the gifts that were under the tree.