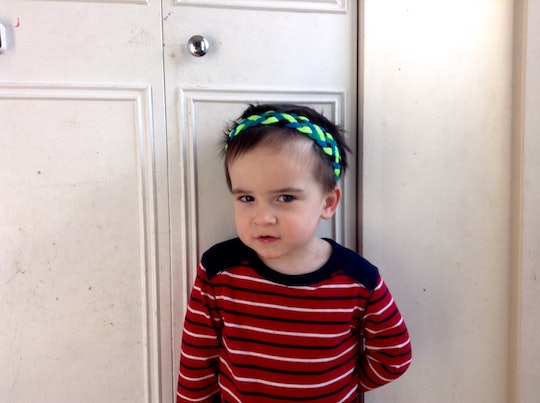 What Happened When I Told My Sons They Were "Pretty"

I'm the lucky mom of two adorable 3-year-old boys who get plenty of praise on an hourly basis. My kids are no stranger to compliments, but I never stopped to think about how the accolades I give them would differ if they happened to be born female instead of male. Societal norms encourage that we compliment boys differently than girls, and for one reason or another, we all follow suit. It's not that my sons are deserving of different praise — they're just as cute, cuddly, and monstrous as any other 3 year old — but I was curious to see just how far our gendered expectations skew.

As both a woman and their mom, I try not to overly thrust stereotypical gender roles on my boys. They have dollhouses and toy trucks, they love to play ball and bake cookies. I've never told them to "man up" or stop crying when they're sad because I don't want to invalidate their feelings and I don't allow them to play rough, because I hate dealing with blood. Still, I thought complimenting them with phrases we typically associate with little girls could be a good way to see if I was subconsciously attributing personality traits or stereotypical gender expectations upon them without realizing it.

For one whole week, whenever I went to compliment my boys, I took a moment to stop and think about how I may compliment them differently if they were female. Once I knew what I would have said to a little girl, I gave my sons that compliment instead. I was entirely conscious of what I was doing, but again, I wanted to see how deep these norms run for all of us, my sons included.

Here's what I learned when I praised my little boys as though they were little girls.

The Compliment: "What A Good Daddy"

My boys inherited my collection of stuffed animals and they even have a couple baby dolls courtesy of grandma thrown into the mix. They love to play with these toys. Sometimes they line them up and cover them with a blanket for a nap or pretend to feed them, other times they fling them across the room or shove them into the oven of their play kitchen. When they play gently, I usually say things like, "How nice and gentle you are!" or "What a clever idea!" But I never say anything about them practicing being a "good daddy," yet I hear friends with daughters who act the same way with their stuffed animals, telling their daughters things like,"What a good little mommy you are!" So, I decided to try it out.

While I think it's important that girls know they can be a mom and have a career too, if they choose, I also think it's just as important that boys grow up knowing they, too, can be nurturing parents. I want my boys to be sensitive adults who aren't afraid to show emotion, and heck yes, I want grandkids someday, so why not encourage them now while they're young?

I'm fortunate to have a husband who is very affectionate with our kids, and I thought having him as a role model would be enough to send my boys down the same path, but there's no harm in reinforcing their parental instincts when I see them in action with a healthy dose of praise. I focused on telling my twins what "good daddies" they were being by taking such care of their toys. Unsurprisingly, they loved their praise, and to be honest, I loved giving it to them.

The Compliment: "What A Sweet Little Boy"

In those rare moments when my boys are playing quietly by themselves, I treat them like raptors. I make no sudden movements, loud noises, and I don't do anything that would draw attention to myself, lest they remember my existence and come over to destroy the carefully folded pile of clothes I'm working on. But since girls are often praised for good behavior and being "sweet," during my time complimenting my sons as I might if I had a daughter, I found myself wanting to acknowledge the moments when they played calmly and quietly.

When my kids get worked up and treat the living room like a bumper-car ride, I obviously make an effort to stop them, but there is a part of me that feels like the behavior is part of "boys being boys." However once I started to compliment them for playing quietly together, they were quicker to settle down when I asked them to.

Not only was a good reminder to tell the kids that I notice when they are being good instead of only pointing out when they misbehave, it also made me question the notion that boys are predisposed to being more physical and rowdy than girls. Not that I excuse bad behavior because they happen to be boys, but seeing how they have the ability to be better behaved means I now have a much shorter tolerance for the times when they do act out. I'll bust out the Mean Mom voice much faster than I used to, because boys or not, they can — and do — know better.

The Compliment: "You Look So Pretty"

I have an extensive collection of headbands, and my boys love to pull them off my head and onto their own. The same goes for necklaces, scarves, sunglasses, my sneakers, purses — basically what's mine is theirs to play with, if I'll let them. The fact that I'll smile and laugh and pull out my phone to take a picture is usually all the praise they receive when they do this, and I know they know they're adorable because they'll say "cheese" or even ask me to take their picture.

This week, whenever they put one one of my accessories, I made a point to gasp and tell them them how pretty they looked. Within days they were parroting the words back to me and asking me if they looked beautiful when they put on a hat. Looking for approval is part of human nature, but it was scary to me how quickly they formed a positive association with the words "pretty" and "beautiful." They didn't care if I don't them they looked "smart" or "adorable," because they were only concerned with one thing: looking pretty. Once they put the headbands on they were immediately concerned over how they looked. As a woman, I recognized that concern all too well. I know that boys don't typically experience language like this, but I realized how getting that type of feedback could lead to a lifetime of striving to seen as beautiful by other people.

I know that boys aren't immune to body-image issues, and I didn't like how quickly they picked up on the notion of looks as being praise-worthy. Although there's no ill intent behind the compliment, I'll certainty think twice before telling someone else's little girl that she looks beautiful. I'm working on finding something else to say to my boys when they put on a pair of sunnies besides, "You look so cool, dude!" Even saying "cool glasses!" would be better because it's about the object their wearing, rather than their bodies. I was only a day in and already shaken up by the affect the compliments had on my sons.

Would I Compliment My Sons Differently If They Were Girls?

I was raised surrounded by strong woman who made sure to compliment my intelligence as much as my appearance, but even with my mother's insistence that I was smart and capable enough to rule the world, thanks to outside influences like the compliments I received from others, as an adolescent and teen I still fell victim to body image issues and wanting to please people before pleasing myself.

In doing this experiment, one thing in particular stood out, and it's the fact that far too many compliments given to girls focus on their appearance and obedience over other things like their intelligence or personality. During an ordinary week, I'll tell my boys they're smart when they complete a puzzle or funny when they try to make me laugh and all those compliments have nothing to do with their appearance, but in my time complimenting them like little girls the vast majority of my positive comments were superficial ones. That's not to say that the only compliments given to little girls are ones that focus on their appearance, but I did notice that throughout the week the compliments I so easily reached for were ones that focused on superficial things — and it made me think a lot about the way we talk to girls and women.

I will definitely make an effort in the future to praise my children for being nurturing and sweet, because boys deserve to be told those are good qualities to have just as much as girls are. At the same time when dealing with girls, like the daughters of friends and family, I'm going to work on complimenting their personalities and intelligence too.