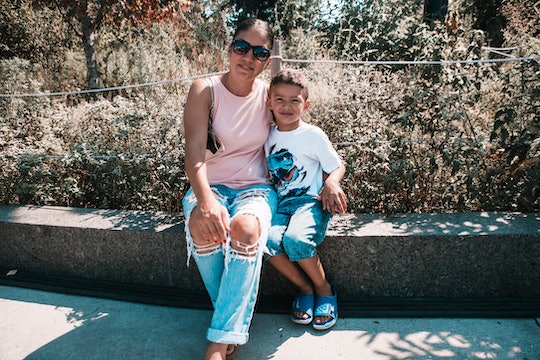 Rarely are parents given the opportunity to view themselves through their children's eyes, which is just one reason why Romper's recent conversations with six kids on what their mom is best at was such a fun exercise. The responses ranged from downright hilarious to stinkin' adorable, with each answer circling back to one beautiful truth — a mother is a child's hero, even if they might not always realize it.

During our inaugural Camp Romper event on Sunday, Sept. 22, we had the pleasure of chatting with several different families. Amid running through a popsicle maze, roller skating, doing crafts, and playing mini golf, we wanted to know what the kids covered in face paint were thinking.

For one 4-year-old boy it was something as simple as "making waffles." For 5 year old Amia, it was "tying bracelets," which, obviously, requires a very specific set of skills.

One little boy (not named below) simply responded "cheese." Moms: deliverers of cheese! Add it to the list of accomplishments.

Our one-on-one conversations with kids of all different ages proved to be extremely heartwarming (and giggle-worthy), so obviously we just had to share their words with the world.

The question: "What's the one thing your mom is best at?"

Spoiler alert: The answers will fill your cuteness quota for the day.

“I think my mom is best at, um, roller skating! Even though I’ve never seen her roller skate before.”

Kids' belief in moms as all-powerful beings has never been better expressed. I bet Aiyanah's mom can roller skate like a demon.

"She takes care of me, she loves me and she hugs me a lot. When I get hurt she’s the first person to be there."

“She’s really good at making breakfast... she gets the cinnamon in my pancakes.”

Get that cinnamon in there, moms!

This might be our favorite answer — note the qualification ("she's very good") in case there was any doubt that this generation of parents was on proverbial fire.

For what it's worth, we also asked a handful of moms what they thought they were best at when it came to being a mother. Do moms think they are best at making waffles, tying bracelets, and... cheese, or is there more to it than that? The answers were, as you might expect, drastically different from the children.

"I've learned to know when to just let go and let them be them. That's hard," Mindy, a 35 year old mother of two, told Romper's Lily Herman. "You've got to let them have their freedom and let them learn on their own."

We also found that other moms were working hard to make sure their children could see the world for as big as it truly is.

"I'm good at exposing my daughter to new adventures and experiencing new things. Also, teaching her kindness: to not exclude," Randa, a 33 year old new mom, said from the epicenter of joining in on that particular day.

The lesson is that kindness looks the same whether you're a kid or parent: cooking waffles and teaching kindness are kind of one and the same.

Or as Melissa, a 47 year old mother of one, put it: "[I'm great at] teaching inclusivity and unconditional love and respect for other people and the planet. That's the only way we're going to have a future: If we all work together."