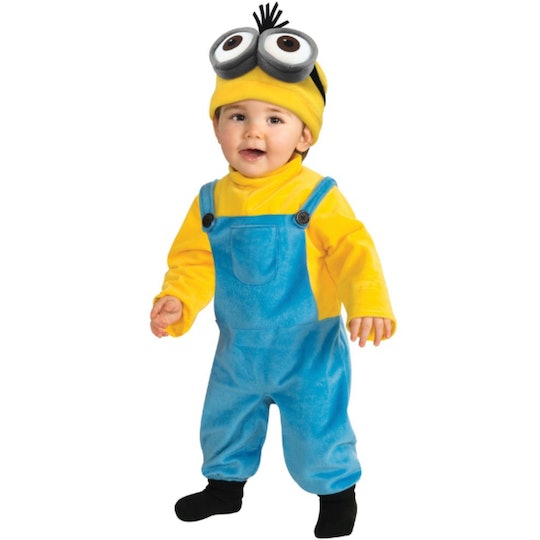 6 Minions Costumes For Babies That You'll Totally Go Bananas For

Although the minions from Despicable Me (and the film's endless barrage of sequels) are technically evil henchman, they're quite possibly the cutest evil cartoon characters to grace movie screens ever. And as such, they make the perfect fodder for Halloween costumes, especially for babies. In fact, even though the thought of minions costumes for babies is obviously a great idea, I'm all for dressing all babies as minions all the time, just because it would be that cute.

To sweeten the deal, when your child is still a baby, they're basically at the mercy of your creative genius (or sense of humor) when it comes to their first Halloween costume. They may hate you for it later, but by the time they turn 2, you can say goodbye to any input you thought you'd have over their costumes.

But, even if you're less passionate about the little "yellow, pill shaped miracle workers," as Scarlet Overkill calls them in Minions (can you tell I have two toddlers? OK, good), simply dressing them as minions for Halloween, and not for the rest of their babyhood will suffice. Luckily, dressing up as the yellow guys is extremely easy. It's as affordable as it is adorable and there are plenty of minion costume ideas to choose from, whether your baby is a newborn or just about to enter toddler-dom.

Some of these costumes are as simple as picking up a pre-made suit from the store. Others require a little bit of forethought and DIY-ing. Whatever option you decide on, you can't go wrong with a minion costume for your baby's first Halloween.