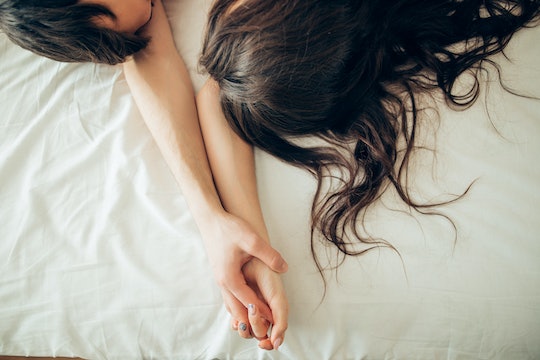 6 Positions For Men To Last Longer, Because You're Not Ready For It To End

When you and your partner become parents, lots of things change about your relationship — especially your romantic life. All of a sudden, sex takes planning, increased privacy, and one ear open to hear the wails of a hungry baby or a sick toddler. The quality of lovemaking becomes more important than ever, so to increase the chances of total satisfaction for both of you, it helps to know which positions help men last longer during sex.

Here's the problem: Although it takes women roughly 20 minutes to reach orgasm, a study of men in five countries revealed that it only takes about 5 minutes for them to climax. Although there's no rule saying that you both have to finish together, you may still want to find a way to slow your partner down so that you're closer to being in sync.

"Many men don’t differentiate between the hardness of their erections and their state of being turned on," Sari Cooper, director of the Center for Love and Sex, tells Romper. "However, these are two measures that men have to understand when they are trying to extend their erection time. When men climax sooner than they would prefer, it can be a sign of a lack of of attunement between how turned on they are and the amount of physical stimulation they’re receiving in a certain position."

Another approach, as Gigolos star Nick Hawk suggested to AskMen, is to have your guy take care of your pleasure manually or orally before even attempting traditional intercourse. "It will become a ritual your body will adapt to and you will have ultimate control," he said.

Whatever approach you take, communication and consent are essential, adds Cooper. Talk to each other about which positions you prefer; if your partner wants to begin or end in a certain position in order to last longer, come up with a word or signal you can use to give the go-ahead.

Try these positions to help him last longer and enjoy a luxurious night of pleasure for both of you.