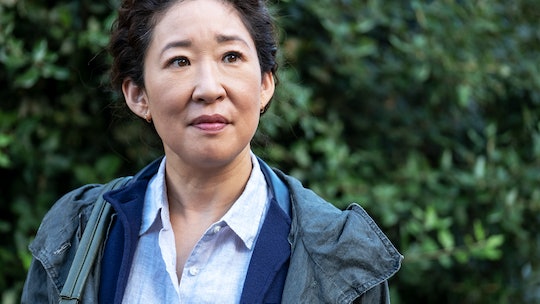 The cat and mouse dance between Eve and Villanelle continues with Season 2 of Killing Eve, and I have never been more stressed out in my entire life. There are plenty of stories to unravel in the upcoming season, so fans have come up with Killing Eve Season 2 theories that will keep your obsession alive until the BBC America series returns on Apr. 7. It's just a shame that some of these theories suggest that a few fan-favorite characters don't make it out in the end. Sorry, baby.

The Season 1 finale of Killing Eve left fans begging for more after Eve stabbed Villanelle in the gut and Villanelle vanished without a trace in a matter of seconds. Now that all of the Season 2 trailers have dropped, fans know that the season picks up right where the finale left off. Hopefully, this means the series will answer the many questions prompted by the first season. But, it looks like things aren't going to be any easier for the show's anti-heroines in the second season.

In an interview with InStyle, Emerald Fennell, who replaced Phoebe Waller-Bridge as lead writer of the BBC America series, revealed, “What I’m most interested in is how women win in a world where the deck is stacked against them. I think Eve and Villanelle were lucky in [Season] 1. It’s what happens when that power is diminished and you have to make something new."

With Killing Eve Season 2 vastly approaching, fans have revisited and analyzed the first season and the second season trailers to get an idea of what path Villanelle and Eve will go down in the upcoming eight episodes. While some of these fan theories might be a little out there right now, they might be shocking enough to be plausible. Just maybe don't expect a happily ever after.