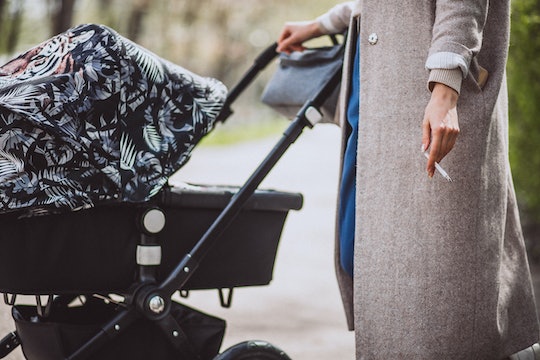 Maybe it's because there is a feeling of guilt way down inside, or maybe it's a "get off my lawn" situation, but boy do folks our parents' age get heated when anyone talks about things our parents did in the '80s and '90s that are big no-nos now. I mean, I don't blame y'all, and obviously most of us turned out OK, but there are some huge safety things that are actually really important that aren't contributing to the "wussification of America," or whatever the heck people are calling it these days.

More Like This
18 Best Sand Toys In 2021 For Babies, Toddlers, & Kids
30 Vintage Photos Of Parents Giving Their Babies A Bottle
The 7 Best Water Tables For Your Little Ones
Best Montessori Learning Towers: 11 Kitchen Helper Stools For Toddlers

I mean, there have been scientific studies done to prove how doing (or not doing) these things is actually better and safer for kids. Statistically, the rates of SIDs has gone down and more children have been safe in car accidents. Just because your kid didn't die in the car without a car seat doesn't mean other people's kids did not during this time — and in high quantities. Or just because your kid didn't die when they slept on their belly doesn't mean many, many kids didn't. Statistically showing, SIDs rates have gone down and our kids are thriving now.

But it's still funny to think about some of the stuff us '80s and '90s kids were allowed to do that we probably wouldn't let our own kids do. And no offense, Mom and Dad, I know y'all were and still are the best parents — and I think I did turn out OK for the most part — but I will continue to put my child in the proper car seat rear-facing until he hits the proper weight limit, among other things.