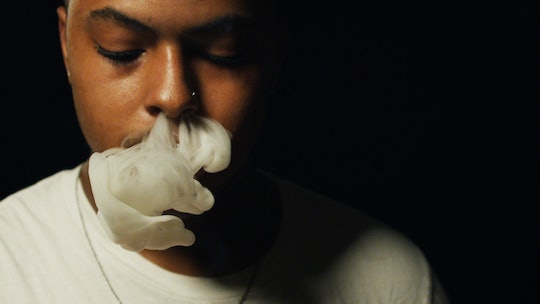 If 4/20 is New Years for stoners, then why not celebrate in the chillest way possible — with Netflix, of course. Because let's be real here. Would you want to spend the holiday curled up with anyone else? The answer is no. But since Netflix often changes its streaming lineup, it can be hard finding exactly what you need — especially if you're a little high. So I've rounded up a few weed-themed movies on Netflix to watch on 4/20. And although some of them are a little out there, they are definitely worth the trip.

I just wanted to make a disclaimer and tell you straight up that this isn't a "best movies while you're stoned" list. So it doesn't include those late-night/early morning movies like Hot Fuzz, Monty Python and the Holy Grail, or The Benchwarmers. Nor does it have classic television comedies like Weeds or That 70's Show. While you can definitely go check those titles out on Netflix right now — and I do recommend that you watch them too — this list is compiled of weed-themed films that will open your mind to new adventures. But that doesn't make them any less fun. So in the spirit of 4/20, here are some weed-themed movies to watch on Netflix.