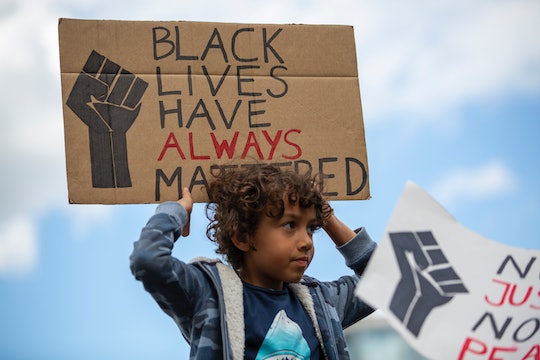 A 6-year-old girl's "Black Lives Matter" shirt got her kicked out of her Arkansas daycare this week. And if that's not outrageous enough, the school told the girl's mother that the message on her daughter's shirt was actually encouraging racism.

For the past six months, 6-year-old Journei Brockman has been attending the "His Kids Preschool" in Russellville, Arkansas. Her mom, Deval Brockman, sent her little girl off to preschool last Thursday with a t-shirt that read "Black Lives Matter," not expecting it to cause any problems. But as Brockman told local news outlet Fox16, a teacher called her at home on Thursday to complain about Journey's t-shirt. "She was like ‘I don’t like it, I don’t agree with it.'"

“I got very upset. I’m just like are you serious? Over a T-shirt?”

Romper has reached out to His Kids Preschool and awaits a response.

The teacher went on to say that she would "prefer it if you didn’t send her to school in it again." The school's director also spoke to Brockman on the phone, as she told the news outlet, saying, "I am not going to tell you how to raise your child but you need to reevaluate how you’re parenting her."

Instead of capitulating, Brockman sent her daughter back to the school on Friday with a t-shirt featuring a raised fist, one of the most visible symbols of the Black Lives Matter movement. When she went to pick Journei up at the end of the day, Brockman says she was told not to bring her back since her t-shirts encouraged racism.

“She asked me Friday, ‘Can I go back?’ No, you can never go back,” said Brockman, according to KNWA Fox24.

The director of His Kids Preschool shared a statement regarding Journei's removal from their program with Fox16 which read, "We feel a childcare environment is not a place for a parent’s political views to be addressed or played out, regardless of race."

Brockman disagrees. "It’s not political, it’s everyday life, It’s all over the news. Right is right and wrong is wrong."

"If I'm supporting something, I'm going to wear it, my child is going to wear it, to help say that our voice needs to be heard," Brockman said. "If you're going to a Christian led daycare, let's abide by the bible then."