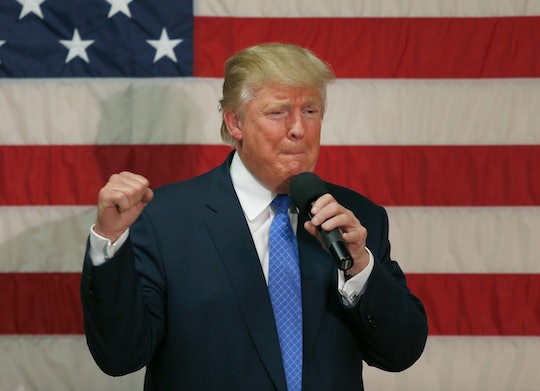 After The Washington Post published a 2005 video featuring Republican presidential nominee Donald Trump gloating about his proclivity to force unwanted sexual advances on women he deems "beautiful" Friday, even his own running mate denounced the comments as offensive and indefensible. To any reasonable adult, these admissions come off as vile and in no way reflective of the way women should be treated. But children are watching, too, and they're forming their worldview and measuring their self-worth based on what they see and hear every day. Kids don't yet have the words or the perspective to dismiss Trump's laughing endorsement of sexual assault, and one 6-year-old's Donald Trump question shows why the rise of misogynistic, dismissive political commentary is dangerous for our nation's girls and boys as they grow up.

In a video of the would-be private conversation with then-Access Hollywood host Billy Bush while both were wearing active microphones, Trump describes how he believes his fame and financial status entitles him to begin kissing women without waiting for consent and to "grab them by the pussy."

"And when you’re a star they let you do it," he tells Bush."You can do anything."

Grown men with any respect for women know this is wrong. Many women see in Trump's comments an infuriating endorsement of sexual assaults perpetrated against them. Children, though, are learning about bodily autonomy, about whether or not it's OK to touch others without their permission, and how much control they can expect to have over their own bodies.

And as the video, long archived and now widely publicized thanks to an anonymous leaker, dominated the the news cycle, children began absorb these cues from Trump himself — the man who, in the same video, referred to actress Arianne Zucker as "it."

And that's the reason elementary school assistant principal Rachael MacIsaac Parker had to talk with her 6-year-old daughter about the fact that "sometimes bad people touch our bodies without permission," she told The Washington Post. "What does it mean to grab somebody by the pussy?" the girl, who also wanted to know whether Trump was a bad guy, had asked her mother.

The question of whether or not Trump, the man, is a "bad guy," is a subjective one. But his comments, established treatment of, an attitude toward women really aren't difficult to categorize as "bad" — assuming we can all agree that sexual assault, objectification, and dehumanization of woman are bad. (Trump offered a scripted video apology late Friday night. "I said it, I was wrong, and I apologize," he said.) Romper reached out to the Trump campaign for comment but did not immediately hear back.

Before that, Trump attempted to justify his statements by labeling them "locker room banter," an attempt to normalize his words and confessed actions. But for kids like Parker's daughter, a normalization of violent actions like forcefully groping a woman's genitals without consent can send a powerful message: This is treatment that people — not just women and girls but any victim of sexual abuse — should expect and accept. And there's another message that could be confusing and harmful, as well: There's no reason to listen to other people, to respect their boundaries or the limits they place on their own bodies for who touches them and when.

That's a perpetuation of rape culture emanating directly from the man who wants to hold the highest office in our nation, whose job it would be to look out for the best interests of all citizens.

The "Trump tape," as history will remember it, is a not-so-surprising revelation about Trump, who once tweeted that sexual assaults in the military are the inevitable outcome of men and women living together. That hardly makes it any less disturbing that impressionable kids are growing up internalizing his evident disdain for women, his clear delineations about their place and function in the world. At best, the tape does represent an opportunity to talk with their kids about these tough issues, and to use Donald Trump as an example of how not to be.