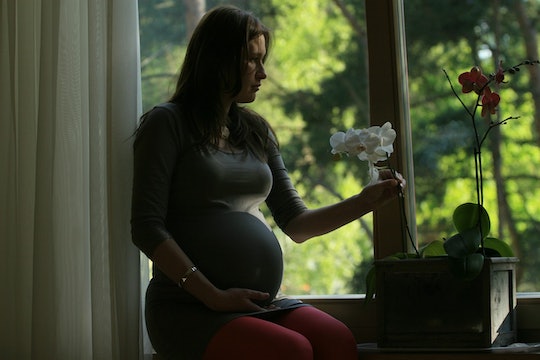 For some unknown reason, pregnancy seems to be some unspoken excuse for strangers, acquaintances, and even frenemies to comment on and give their unsolicited opinion about your pregnancy. From random people who feel the urge to put their hand on a woman's growing stomach to the kooky aunt who means really well but scares everyone with her childbirth horror stories, there are all sorts of odd social interactions that happen when a woman is with child. But no matter how good your intentions are, there are just some "compliments" you might say to a pregnant woman that are actually insults.

It may seem like a stereotype or a cliché, but I'll be the first to admit that I was way more sensitive than usual when I was pregnant. So even the tiniest remark that seemed to be a thinly veiled passive aggressive dig could send me into a spiral of insecurity. Although every women is different and has her own level of tolerance for weird, rude, or just plain awkward pregnancy-centered remarks, there are still some things that are universally agreed upon as being in poor taste. So before you accidentally stick your foot in your mouth with a well-intentioned comment that backfires, check out these top compliments you might say to a pregnant woman that are actually insults.