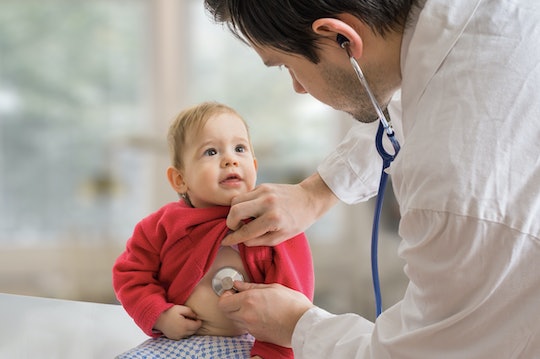 7 Creepy Things Your Baby's Pediatrician Will Probably Do

Taking a kid to the doctor can go one of two ways: without a hitch, or in the worst of ways that's bound to end in tears for all involved. Good doctors — the ones who make you feel more like family than another appointment on their schedule — can be hard to find, and even the good ones can make you feel awkward at times. And, unfortunately, there are some seriously creepy things your baby's pediatrician will probably do that will make every visit a goddamn chore.

My daughter's first pediatrician was a kind, naturally maternal doctor who, at least in my opinion, performed some pretty strange exams. Of course, my partner and I were new to parenting and had no idea what to expect, but still. For example, there was a time when our baby was obviously ill, but the only free appointment we could snag was on a Friday afternoon. So after we waited, and after a brief checkup, it was concluded that our daughter either had pneumonia or mononucleosis (mono). The two can have similar symptoms, but what what I found to be most peculiar was the treatment — or lack thereof. The pediatrician explained to us that getting an X-ray wouldn't yield results until Monday, and, by then, it wouldn't matter what our baby actually had. At least, that's what we were told.

As it turns out, our baby was very ill for well over a week. She did nothing but sleep, and her fever reached near-dangerous levels a time or two. But every call back to the doctor resulted in someone telling us just to wait it out. I appreciate the slow-reaction to prescribing antibiotics, but there are some illnesses that call for them. And because there were no prescriptions called in, no instructions to go to the emergency room at any point, and no apparent cause for concern, the whole scary situation left my partner and I completely baffled. If you can't trust your pediatrician to help your children, who can you trust?

Thankfully, that isn't normal practice for all pediatricians or doctors. We eventually left that particular provider and found someone who's standards were slightly different, and that pediatrician was a much better fit. But through a substantial amount of trial and error, we took note of the creepy things pediatricians do, including the following: